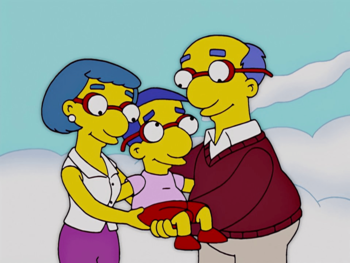 Are we sure they're not siblings?note They're actually cousins.
Advertisement:

Alice sure looks like her mother quite well. You could say that she looks like a younger version of her mother. Later on, we see her father, who also looks like her. Wait, wouldn't that make the mother and father look suspiciously similar too? And that it does, when we see the whole family together!

The same thing can be said about couples. The two characters apparently are not related, yet somehow you could tell they would click because they look similar to each other.

There are many reasons why this happen. For parents, it could be explained that the son or daughter is conceived by the show first before creating the parents of the character. It could also mean a reflection on real life, as people are attracted to someone that looks like them.

Usually the blood relationship of the couple is stated or implied to be unrelated early on to avoid questionable stuff.note Though if they look like twins because they are twins, it's Half-Identical Twins and Twincest. If they look like each other because they are each other it's Screw Yourself and either Opposite-Sex Clone or Homosexual Reproduction.

Often done when designing a romantic partner in a really short piece of media in order to save time. If not, don't expect the couple to be main characters.

See also Birds of a Feather, which goes beyond the characters' looks. Related to Model Couple, especially when used for advertising. If it's about minority races then it's Like Goes with Like. May involve Coordinated Clothes.