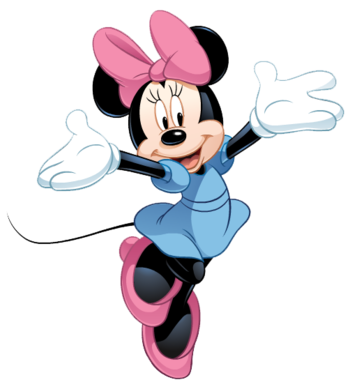 I'm the guy they call little Mickey Mouse
Got a sweetie down in the chicken house
Neither fat nor skinny
She's the horse's whinny
She's my little Minnie Mouse!
—"Minnie's Yoo-Hoo"
Minnie Mouse is a Funny Animal cartoon character created by Walt Disney and Ub Iwerks, the latter who first drew her alongside Mickey Mouse in 1928. Her full name, Minerva Mouse, is given in the comic strip story "The Gleam" by Merrill De Maris and Floyd Gottfredson and published from January 19 to May 2, 1942.
Advertisement:

In many appearances, Minnie was presented as Mickey's Love Interest, a close friend to Daisy Duck, and/or a friend to Clarabelle Cow.

Her current voice actress is Kaitlyn Robrock, taking over from Russi Taylor, who voiced the character from 1986 until her death in 2019. The Mickey Mouse Mixed-Up Adventures episode "Mickey's Roommate/Minnie's Bow-tel!", was the very first instance of Robrock voicing the character.

Tropes that apply to Minnie: