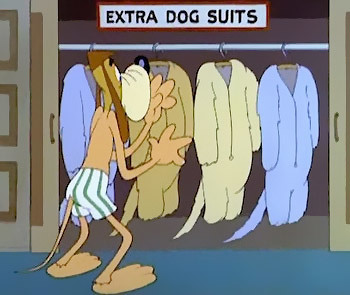 Always a good idea to keep extra fur around...
Stewie: Brian, quick, grab some money.
Brian: (Picks up a handful of cash and stuffs it in his sides)
Stewie: Y-you have pockets? Are you putting that in pockets? That's so cute.
— Family Guy - Back to the Pilot
Advertisement:

In animation, sometimes a Funny Animal who doesn't wear any clothing will, as gag, treat the fur that covers their bodies as a removable suit. This can be revealed in a few ways: perhaps a Non Fatal Explosion goes off, leaving our character in Ash Face and furless, with only Goofy Print Underwear on. Or, the character can remove their fur voluntarily by using a zipper that was never there before. It's almost always Played for Laughs. This can also provide a loophole around Non-Humans Lack Attributes, hence the character will usually react in embarrassment after their fur has been removed. This also almost always tends to be non-canon, as the characters who remove their fur will also have been shown bathing or showering without having to do this. Of course, there are some exceptions.

There is a variant of this trope in which an animal character has pockets as part of their actual physiology. Those pockets are most commonly located on the thighs. Another variant involves animal lifting the fur or skin on his or her leg to reveal a sexy woman's leg. Another variant takes on the form of a Fur Bikini with the actual fur looking like a bikini on the character.

Each variant can also work with feathers, or, more rarely, scales and skin. Not to be confused with Pretty in Mink or Fur and Loathing, though any of those might be referenced for the sake of humor.

Compare Removable Shell for the shelled animal variant, Removable Animal Markings for when an animal's natural stripes and spots are depicted as removable, and Clothing Appendage for when the "garments" aren't removable. Subtrope of Appropriate Animal Attire. See also Exposed Extraterrestrials and Fur Is Skin.

Fur Used to Show Some Leg: