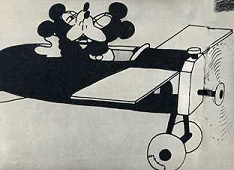 Mickey Mouse taking a kiss by force. No, really.
"Mickey was based on the character of Douglas Fairbanks Senior. He was the superhero of his day, always winning, gallant, and swashbuckling. Mickey's action was in that vein. He was never intended to be a sissy, he was always an adventurous character. I thought of him in that respect and I had him do naturally the sort of thing Doug Fairbanks would do. Some people got the idea that in Plane Crazy, Mickey was patterned after Lindbergh. Well, Lindy flew the Atlantic, but he was no Douglas Fairbanks. He was a hero to boys because of airplanes and what he had accomplished flying the Atlantic. But Mickey wasn't Lindy— he was Douglas Fairbanks."
— Ub Iwerks on the original Mickey Mouse
Advertisement:

The debut short of Mickey Mouse, this originally silent cartoon from 1928, while nowhere near as important or revolutionary as "Steamboat Willie" (Ub Iwerks himself said the short wasn't much different than what was being done at the time) is important in that it is not only his debut, but also a prime example of Mickey's original characterization — here, he's a very self-confident, adventurous but overambitious mischief maker who attempts to fly a plane, inspired by Lindbergh (although Mickey himself, as stated above, is based on Douglas Fairbanks). In the meantime, Minnie Mouse joins for a ride as Mickey loses control of his homemade plane. Hilarity Ensues.

The short was made not long after Walt lost the rights to Oswald the Lucky Rabbit, drawn and animated entirely by Ub Iwerks in two weeks notice. The short was not particularly popular upon debut, but when Steamboat Willie came around and gave the then declining animation industry (cartoons were falling out of popularity at that point) the kick in the pants it needed via sound, this cartoon was promptly rereleased with sound dubbed over it.