All Men Are Perverts 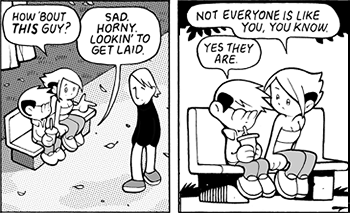 "Do you know what would be the best way to wipe out all of humankind if you were a space alien with a special mind-ray? Make all women telepathic. Cos' if they suddenly found out about the kind of stuff that goes on in our heads they'd kill us all on the spot. Men are not people! We are disgustoids in human form."
— Jeff Murdock, Coupling
Advertisement:

The tendency for all men within a work of fiction to think primarily with their penises. As such they will be constantly trying to peek up girls' skirts or into the girl's locker room and will go out of their way (often to absurd lengths) to either catch a glimpse of something naughty or gain a minuscule chance of doing the deed. Whenever they actually get a peek at a woman's breasts, they lose all brain function. This trope is often used as an excuse to hand male characters the Idiot Ball. Men will become catatonic, prove unable to think straight, get massive nosebleeds, etc. just because an attractive woman is in the room. If a man shows any amount of interest in a woman, it's assumed to be sexual. This trope is so prevalent that, if a male character is not being lecherous around women, he is often assumed to be either gay, completely asexual, or just not right in the head.

This leads to Unfortunate Implications for any male-female relationship between characters that would normally not involve sex. Any contact, be it between family members, at the workplace, or even in a celibate organization has the potential to be treated as perverted; especially when law enforcement is involved, regardless of the truth. Then there's the Double Standard: Rape, Female on Male, suggesting that if all men always want sex and would never turn it down, then they cannot be raped by a woman. This is ripe for exploitation by a villain(ess).

All Women Are Prudes is this trope's corollary and a harmful Double Standard because it promotes the idea that female sexuality and sexual desire are somehow abnormal, with Nipple and Dimed (or other body parts) applying only to women.

This is a Cyclic Trope. It was prevalent in the past that All Women Were Lustful, with men considered less sexually motivated than women as recently as the Renaissance. Everybody Has Lots of Sex is when both genders are considered equal in this, usually in a Free-Love Future.

Compare All Gays Are Promiscuous (what happens when there aren't any women involved to say no), All Women Are Doms, All Men Are Subs (as long as he has a chance to get some sex out of it), I'm a Man; I Can't Help It (focuses more specifically on the idea that a man can't function without sex instead of a universal perversion), A Man Is Always Eager (which purports that "real men" never say no to sex when presented with the opportunity, no matter the circumstances) and Nerds Are Virgins (just because you're a pervert doesn't mean you get laid).

Shortly after crash-landing on Oroboris, Julie scans the planet, and stumbles across two lizard-like alien creatures in the midst of getting it on.

They stop their lovemaking upon noticing Julie, and scatter when she opens fire against a bug-like creature she thought was much bigger than it actually was, due to it appearing on her visor.

Shortly after crash-landing on Oroboris, Julie scans the planet, and stumbles across two lizard-like alien creatures in the midst of getting it on.

They stop their lovemaking upon noticing Julie, and scatter when she opens fire against a bug-like creature she thought was much bigger than it actually was, due to it appearing on her visor.