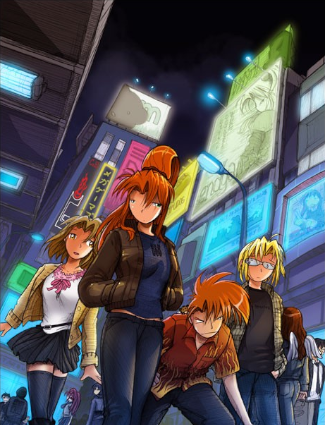 From left to right, foreground: Kimiko, Erika, Largo, and Piro. From left to right, background: Ed, Junpei, Ping, Miho, Seraphim, and Dom.
"You see, nothing in the real world will ever live up to what I feel inside. I came to terms with that a long time ago... Maybe it's because the feelings I have work only in fantasies, not the real world. That's why I want to be an actress. It's a way to live what I feel, even if it is just part of a story."
— Kimiko
Advertisement:

One of the most successful Webcomics around, and one of the easiest to find in brick-and-mortar bookstores, MegaTokyo

is also one of the most confusing. The story starts off when two American video game otaku — Piro and Largo — hop on a one-way flight to Japan, then find themselves unable to get back after a credit-card-maxing shopping spree.

Debuting in 2000 and still ongoing, the comic has gained a great deal of infamy for its erratic schedule, along with the Dead Piro Days (DPDs) and stick-figure Shirt Guy Dom (SGD) comics (a takeoff on the "Shirt Guy Tom" comics from Sluggy Freelance).

Has been called the Lost of webcomics for its complex plot line and character histories, most of all the enigmatic Tohya Miho. Quite intentionally, it includes a number of anime tropes. Interesting to note, however, is that it is one of few works who take flak for being Trope Overdosed, despite it having a trope count of around 650.

for a Visual Novel game based on the comic. The funding request was wildly successful but for a variety of reasons the game never shipped and now appears abandoned. Gallagher continues to publish new Megatokyo comics as of 2020.