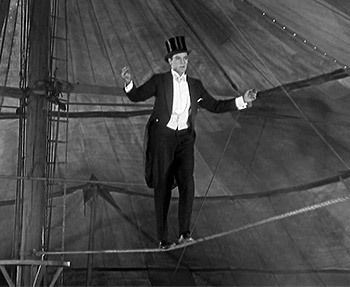 For this activity, a balanced diet is especially important.
Advertisement:

Tightrope walking, or wire-walking, is an old practice in many different regions. In fictional works, a character, (whether it be through training or from magic), is able to walk, or even run, across very thin surfaces.

It is, in the simplest sense, walking on tightened ropes. The performer may use a balancing tool such as an umbrella, a long pole, or they may stretch out their arms. Tightrope walkers were staples in traveling circuses. These balancing performers walked on ropes high above the circus ring. There are other more dangerous versions of this as well.

High-wire walkers walk generally about 20+ feet off the ground. Skywalkers take their stunts to Dangerous Heights by walking between skyscrapers, poles, and other terrifying places. Even more dangerous versions of sky-walking involve tightrope walkers stretching ropes over The Grand Canyon without any climbing gear to speak of.

Being able to walk on ropes is not a very common skill in Real Life, and reveals a lot about a character, like that they have a very good sense of balance and body control, that they can perform graceful, lithe combat maneuvers. Depending on the background of the work, it can imply a character's history with a traveling troupe, ninja village or a circus, for example, pointing to useful further contacts for the character.

This trope takes into account all objects these skilled balancers walk and run on. These include but are not limited to ropes, wires, thin railings, chains, power lines, or any other super thin surfaces.

Compare Electric Slide for more "shocking" examples, Grind Boots for when skateboards are simply too expensive, and The Precarious Ledge for when high wire walkers get cold feet. Also compare I Have the High Ground, and promptly thwack them round the ankles. That'll teach 'em. May be a talent of The Lightfooted.

Wile E. Coyote fails an attempt at this while trying to reach the Road Runner on the other side of the ravine.

Wile E. Coyote fails an attempt at this while trying to reach the Road Runner on the other side of the ravine.