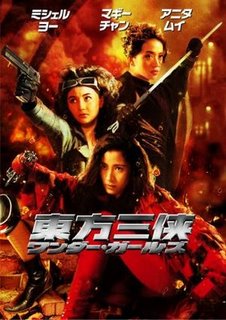 The Heroic Trio is a 1993 Hong Kong action film directed by Johnnie To, featuring an All-Star Cast including Michelle Yeoh, Maggie Cheung and the late Anita Mui as the titular trio.

This film is an example of Hong Kong Wuxia, Wire Fu, and Heroic Bloodshed. The three main characters form a team of Action Girls. The Rule of Cool helps to excuse some of the more over-the-top action sequences. The fight scenes are all highly choreographed whirling mayhem filmed with sweeping tracking shots and plenty of ringing and swishing sound effects.

Other examples of tropes in this film:

The sequel to Heroic Trio. Set 20 Minutes into the Future, Hong Kong has been ravaged by a nuclear explosion. Water is scare and to make matters worse, an Evil Genius named Mr. Kim has taken control of the city's supply. He is using his grip on the city's water in order to control the leaders. The Heroic Trio reform in order to take him down.

The movie was released the same year as the Heroic Trio but doesn't seem to be as popular at least amongst American cult fans.