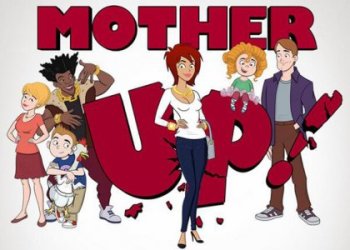 Mother Up is a Canadian-American Hulu and Citytv Original animated series. It ran from late 2013 to February 2014.

Rudi Wilson (Eva Longoria) is a high-flying, hard-partying executive for a major music label. She's living in the fast lane until a scandal erupts. Rather than take the fall for it and get fired, Rudi publicly resigns to "spend more time with [her] family." She then takes her children Dick and Apple to their new home in Willowdale, a suburb somewhere in Canada.

The self-absorbed Rudi fails to notice that her husband Jeffrey has left her until they actually get to the new house. Rudi also discovers that she doesn’t know how to manage a household or take care of children without servants. Rudi’s also initially unprepared to interact with suburban culture like soccer moms and neighbors who actually talk to each other.

This Hulu original provides examples of: