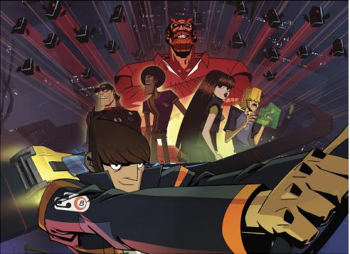 From Disney Television Animation, Titmouse and the creators of Megas XLR, Motorcity is a Disney XD series.

Despite being well received by critics and fans, the show was unfortunately Screwed by the Network note Disney is pretty well known for not really being into "gritty" series such as this. Having cancelled TRON: Uprising not too long ago. Combined with likely how expensive the animation was, it probably wasn't really a surprise to most when news of it's cancellation came. , and received the axe before the first season was even finished. Much like their previous series, Megas XLR though, the staff was able to give their last (and in this case only) season a Grand Finale.

A staff-run blog, People of Motorcity,

has released the series bible.