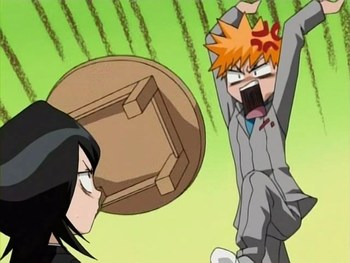 When, out of anger or frustration, one character flips over a table that another character is sitting at, doing something on, or eating from. When the character is frustrated with himself/herself, they might flip their own table as a sign of extreme fury.

In Western uses (where it's often substituted with Desk Sweep of Rage), it's almost always a sign of a hot-tempered or violent character, and is done in anger, but as an alternative to hitting a person; while in a Boke and Tsukkomi Routine, it's more likely to be caused by frustration. Sometimes, the character is drunk and filled with rage, which is more often used in Japanese media. This may also be used in action movies as a form of diversion when fighting breaks out. In either case, the table may be covered with countless small objects which go flying everywhere when it is flipped.

See also Tantrum Throwing. If the action taking place at the table is a game of some sort, Flipping the Table often accompanies a Rage Quit, or more general Screw This, I'm Outta Here!.

Not to be confused with Flipping the Bird, although both tropes involve angry reactions.

One of the Met Gala guests isn't a big fan of responsibility...

One of the Met Gala guests isn't a big fan of responsibility...