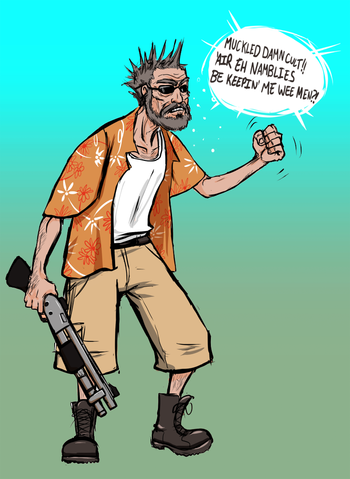 You cannot drive mad he who is already insane.
I'd like to start by saying that the GM was a bastard that had it coming.
— Waffle House Millionaire
Advertisement:

Once upon a time, there were a few guys enjoying a Trail of Cthulhu campaign set in the modern times. Except they weren't, because they were stuck with a Killer Game-Master. He was unfair, and unfun, and a few other "un-"s for good measure, harming and killing characters just because he could get away with it. It was bad, yes, but not unbearable enough to stop playing...

Then said GM made the mistake of angering The Roleplayer of the group. Now the guy in question, Waffle House Millionaire, didn't usually mind if his character got killed as long as it fit the narrative. A bad roll? Sometimes accidents happen. A bad decision? He did that in-character, even though he personally knew it was a bad idea. Bad circumstances? He could get upset, but won't hold a grudge. The game master gets defensive over his GMPC, makes up a curse regarding horses, and causes a horse to fall from a plane and land on his head? According to A Self Called Nowhere (one of the other players, and the eventual narrator of the "Director's Cut" of the tale), he had to physically restrain WHM from choking the DM to death.

: a Crazy Awesome Munchkin Loonie whose sole purpose in life was to completely derail the campaign, aided with the Backstory Of Doom, the sole purpose of which was to be so long and confusing that the DM wouldn't read it and thus wouldn't know that WHM was adding in skills and feats on the fly. The accounts of this are retold by Waffle House Millionaire and A Self Called Nowhere.

Compare The Ballad of Edgardo and That Guy Destroys Psionics.

Despite his ability to derail everything, we've managed to keep this trope list straight: