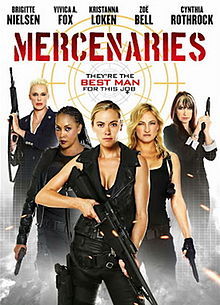 Mercenaries is a 2014 action film by The Asylum, essentially a distaff version of The Expendables starring Kristanna Loken, Brigitte Nielsen, Vivica A. Fox, Cynthia Rothrock, Zoë Bell, and Nicole Bilderback. While visiting Kazakhstan, the daughter of the president is kidnapped by a female warlord, Ulrika, and held for ransom. Because Ulrika distrusts men, the normal operatives are of no use, so Mona Kendall of the CIA (Rothrock) recruits four women in prison with unique skills to save the president's daughter.