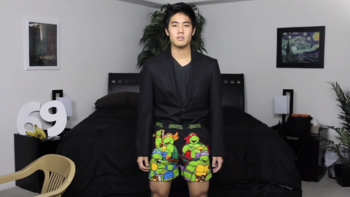 "I suggest you should look somewhere else."
Advertisement:

, was the seventh most-subscribed person on YouTube with over 15 million subscribers. He has six main video types:

One of his more notable projects was an internet movie he created with Wong Fu Productions called "Agents of Secret Stuff". Tropes exclusively from A.S.S. (teehee) should be placed below examples from the regular videos.

Examples of tropes from videos: