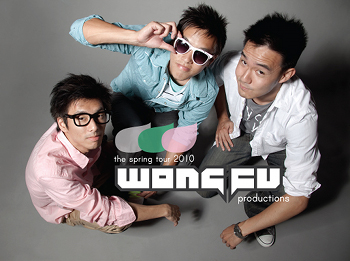 If at the end of the day there's someone out there who has a better day because of us, then we've succeeded.
"It's the end of the week! A Wong Fu week! It's Wong Fu Weekends!"
— a line Phil goofily sings as an intro to their "Wong Fu Weekend" Youtube video shorts.
Advertisement:

During their years at the University of California San Diego, budding Chinese-American filmmaker friends Wesley Chan, Ted Fu, and Philip Wang, collaborated and produced a number of music videos and short films, along with input and support from their friends.

Eventually their skillful videos got picked up and were featured in a number of national and international film festivals, including the Los Angeles Asian Pacific Film Festival, San Diego Asian Film Festival and the Cannes Film Festival.

This landed them professional careers in the filmmaking business, as they made official music videos for established musicians, commercials for well-known companies, and video collaborations with other filmmakers. Soon this gave them opportunity to put up their media company, Wong Fu Productions.

Composed of mainly Chinese-Americans along with others of different Asian heritage, Wong Fu Productions gained Youtube celebrity status over the years 2008 and on. This was mainly due to their consistent high quality, well thought out, and entertaining Youtube videos. Their subjects vary from video to video, such as love, friendship, East and West culture, and many more. Wong Fu Productions' style is known to be very wholesome and ideal for all ages to watch, unlike other Youtube channels that are more suited to mature viewers.

Part of Wong Fu Productions' success might be because the cast and crew are full of attractive Asian-Americans.

One of their most popular videos is "Yellow Fever

", a comedic look at the Mighty Whitey and Mellow Yellow trope. It was uploaded on a friend's channel and garnered two million views. The most viewed video on their official Youtube channel however is the short film "Strangers, Again

Collaborated with Ryan Higa on "Agents of Secret Stuff". Tropes pertaining to "ASS" should be placed in the appropriate area on the Ryan Higa page.