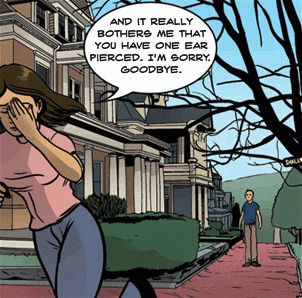 The asymmetry, man! The asymmetry!
"I thought after all these years of searching around
I'd found my soulmate finally.
Then one day I found out she actually owned a copy of Joe Dirt on DVD."
— "Weird Al" Yankovic, "Close, but No Cigar"
Advertisement:

A Guy or Girl of the Week who is practically perfect in every way, except for one glaring flaw that any normal person would probably be able to live with, but which the protagonist feels is too much for them to handle. The 'glaring' flaw is often something incredibly minor, and may be used to show that the protagonist is a pretty shallow, self-absorbed, petty character. Other times, the writers just wanted to hit the Reset Button.

For the sake of comedy, the more that one of these breakups sounds like an example of a tale from Cloud Cuckooland, the better. Usually.