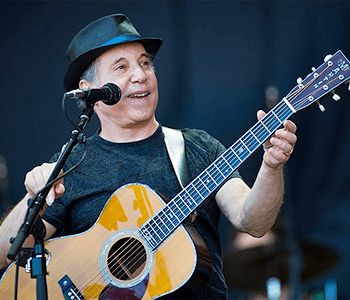 If you'll be my bodyguard,
I can be your long-lost pal.
I can call you Betty,
And Betty, when you call me you can call me Al.
— "You Can Call Me Al"
Advertisement:

Paul Frederic Simon (born October 13, 1941) is an American folk and rock musician known both for his initial career in the Folk Rock duo Simon & Garfunkel and his eclectic solo career, which has ranged from straightforward pop, rock and folk to world music explorations.

Raised in Queens, New York, Simon first began performing with his school chum Art Garfunkel in 1957 under the name Tom and Jerry (even having a minor chart hit that year with their single "Hey Schoolgirl"), but the partnership only became permanent following the success of their 1965 chart-topper and Signature Song "The Sounds of Silence". The duo released a string of critically acclaimed albums and became famous for their close harmonies and Simon's alternately surreal, poetic and humorous lyrics, before calling it a day in 1970.

Simon quickly moved on to a solo career, releasing the eponymous Paul Simon in 1972. For the rest of The '70s, Simon pursued a jazz-pop sound with occasional elements from other genres such as gospel ("Loves Me Like a Rock") and reggae ("Mother and Child Reunion"). While his first three albums were greeted warmly by the record-buying public and critics, he went on a hiatus after 1976, dabbling with acting for a while. His supposed "comeback" records between 1980-1986 saw him abandoning his jazzy sound in favour of more experimentation and sold poorly.

However, Simon rebounded with Graceland (1986). Recorded in South Africa with a cast of talented African musicians and containing a fusion of Western pop-rock and folk music with African genres such as isicathamiya and mbaqanga, the album was released in 1986 to a wildly positive response despite considerable controversy surrounding Simon's decision to record in South Africa at the height of both Apartheid and a United Nations-led cultural boycott against South Africa meant to protest Apartheid. The album re-established Simon as a successful artist and became an enduring benchmark by which "world music" experiments by other pop artists are measured, though the Graceland controversy still chases him around here and there even today.

Away from the music world, Simon is a member of the Saturday Night Live Five-Timer's Club (even appearing in the original titular sketch). His memorable music video for "You Can Call Me Al" features Chevy Chase.

"You Can Call Me Tropes":

50 Ways To Leave Your Lover

On the episode of The Muppet Show with Paul Simon, it was a running gag for someone to say a spoof of the title of the Paul Simon song "50 Ways To Leave Your Lover".

50 Ways To Leave Your Lover

On the episode of The Muppet Show with Paul Simon, it was a running gag for someone to say a spoof of the title of the Paul Simon song "50 Ways To Leave Your Lover".