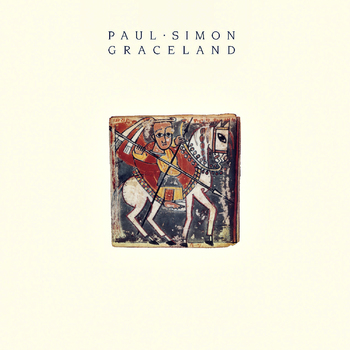 "I am following the river down the highway, through the cradle of the Civil War."
Advertisement:

Graceland is the sixth studio album by Paul Simon, released in 1986. It is perhaps his most famous solo album, well known for hits such as "The Boy in the Bubble", "Graceland", "Diamonds On the Soles of Her Shoes" and "You Can Call Me Al". It's certainly his best-selling record in commercial terms; it sold over 14 million copies and won the 1987 Grammy Award for Album of the Year.

The album is famous for featuring the cooperation of many South African musicians, thus providing a very African atmosphere and giving those musicians the Colbert Bump. However, that same cooperation ended up attracting significant amounts of controversy for Simon, as it meant that he was visiting and operating in South Africa during a time when the United Nations had instituted a cultural embargo against the country, with artists being encouraged to avoid visiting in protest towards Apartheid.

Simon's visit to South Africa was seen as a defiance of this popularly-supported boycott, with the Unfortunate Implications behind it being something that Simon would end up spending the rest of his career adamantly refuting. Simon additionally drew criticism from African-American groups in the United States for what they perceived as cultural appropriation, despite Simon actively working with South African artists to provide a proper and authentic representation of their culture.

In 2007 "Graceland" was inducted in the National Recording Registry for being "historically, culturally and aesthetically important." A documentary about the creative process behind the album can be seen in the Classic Albums TV documentary series, as well as in the 2012 documentary film, Under African Skies by Joe Berlinger. The latter additionally goes in-depth into the controversy that followed the album's release, thoroughly displaying the multitude of different ways that the album was received and ultimately leaving it up to the viewer to form their own perception of Graceland based on the testimonies shown.

Alongside So by Peter Gabriel, Graceland is further significant in that it represented the peak of the worldbeat boom that had been going on throughout the 1980's, first kickstarted by Gabriel's Melt and Talking Heads' Remain in Light, both in 1980. However, the controversy this album spawned served as a leading factor in the decline of worldbeat throughout the remainder of the decade, as more and more people began to question the ethical and sociopolitical implications of white artists like Simon, Gabriel, and Talking Heads making use of sounds and styles from nonwestern countries. Gabriel and the members of Talking Heads (particularly frontman David Byrne) would eventually manage to free themselves from the debate as their socially conscious sides and earnest appreciation for World Music became increasingly well-known, but Simon would remain dogged by the controversy up to the present day.

Graceland was supported by five singles: "You Can Call Me Al", the Title Track, "The Boy in the Bubble", "Diamonds on the Soles of Her Shoes", and "Under African Skies".

If you'll be my bodyguard, I can be your long-lost trope: