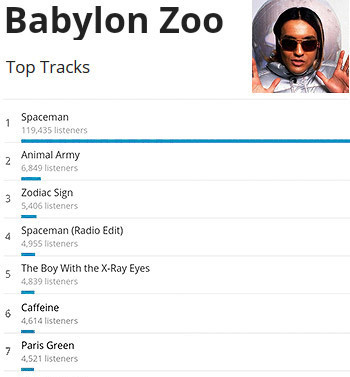 by a landslide.
"So many lovely melodies...
So many messages to convey...
But they don't care about any of these...
Play that one damn song
is what they all say."
— Reel Big Fish, "One Hit Wonderful"
Advertisement:

A one-hit wonder is a music artist primarily known for one "hit", typically defined as a song that charted in the Top 40 of the Billboard Hot 100 (the most widely-cited ranking of American music sales, radio play, and streaming) or an international equivalent. If they're lucky, the artist's next single may chart as well, but despite the ubiquitous fame of their first hit, they never really reach the same level of popular success and soon fade from existence. The strange mix required for an artist to release one song that has massive appeal but for none of the rest of their catalogue to match it make one-hit wonders a favorite piece of trivia among fans of music and pop culture.

Usually, the public defines a "one-hit wonder" by cultural impact rather than chart placements (since relatively few people know such trivia off-hand). For example, if an artist has a massive #1 hit, getting a #40 will technically disqualify them as per Billboard's definition of a one-hit wonder, but it's highly unlikely that the #40 will continue to be remembered over time and they will likely become a textbook example of such an artist (well-known examples of this situation include the cases of Chamillionaire, Tommy Tutone, Rockwell, and Vanessa Carlton). Other artists were massive in their prime, and even though they still had clearly defined Signature Songs, nobody would ever consider labelling them as one-hit wonders. However, as time goes on, the artists fall so hard into obscurity (either becoming a Cult Classic, or worse, getting Condemned by History) or the signature song's memetic status and ubiquity so overshadows their other work that their discographies are almost completely forgotten outside of the signature song. Thus, they are erroneously looked back upon as a one-hit wonder—acts like Vanilla Ice, Soulja Boy, Meghan Trainor, Coolio, Rick Astley, and even MC Hammernote All of whom had at least two top ten hits, with Astley even having two #1 singles are commonly thought of as one-hit wonders for this very reason.

It is not uncommon for a group to be a one-hit wonder then break up, allowing one or more members to become (more) successful solo acts. It is also not uncommon for the one hit to be atypical of their oeuvre. Also compare Tough Act to Follow and One-Book Author. Of course, if sufficient backlash is applied, they will Never Live It Down. Note that a one-hit wonder on the American charts may be a different story in other countries; many popular European artists, like Gary Numan and Frankie Goes to Hollywood, charted only once in America. For that matter, many American artists like Queensrÿche have only charted once in their homeland but are popular in foreign markets such as Europe, Asia and Australia. Likewise, there are many artists, like Jimi Hendrix, Korn, The Grateful Dead and Rush, who only once reached the mainstream Top 40 but are respected figures and even trendsetting within their genre; several such examples are listed below. Some observers and music writers will dispute whether these artists count as "one-hit wonders", merely artists that had one Top 40 hit and more of a piece of chart trivia than a specific label.

For further reading, and a good definition of who may and may not be a one-hit wonder, check out this 2012 article

for The Village Voice. It largely focuses on the specific cases of Owl City and Carly Rae Jepsen, both of whom are generally considered one-hit wonders despite the fact that their collaboration "Good Time" became a top 10 hit, but also looks at the term "one-hit wonder" from a broader aspect (for example, Rick Springfield, who had five top 10 hits but is still primarily known for his only #1 hit, "Jessie's Girl").

There are countless examples, so this article will only list a handful of representative samples. Compare No-Hit Wonder, wherein an artist manages long-term success without even so much as one big hit, and Two-Hit Wonder, where an artist is lucky enough to score a second hit. Also see Hitless Hit Album, where an artist has a hit album with no hit songs. Contrast Breakthrough Hit, where one hit leads to a string of later hits. Also compare Signature Song which is the biggest hit. May overlap with Small Reference Pools, especially non-music examples. Many of the artists listed here are mislabeled because they have a signature song but still had lesser hits. There have been rare instances where the band had a Top 40 hit, but it is not their most popular song and the signature song the band is known for didn't chart well or at all. Often, this is due to a chart technicality, as Arlo Guthrie, the Rembrandts, and Fastball have seen. When the artist's best-known hit is in a markedly different style than the rest of their work, that's a Black Sheep Hit.

Subtrope of He Also Did, which is when an artist has a mixture of very famous work and not-at-all-famous work.

Has nothing to do with One-Hit-Point Wonder and usually has little to do with a One-Scene Wonder, which is a small but very memorable role in a large work that may actually be by an A-list star (possibly because he or she is one). Compare One-Song Bard, where a fictional musician only ever plays one piece in the story (because the creators didn't bother to record more than one).

To qualify as a One-Hit Wonder, the hit must be at least 5 years old or the creator/artist must have retired or disbanded.