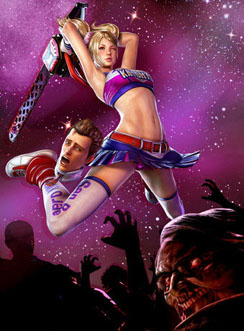 As far as last things to see before you die (again) go, this one's not so bad.
"My family's throwing me a birthday party after school. Nick is totally freaked out having to meet my family for the first time. But I'm even more freaked out for him to find out about my family. Because even though they're the most amazing ever, some of our traditions are a little... unusual. Nick's already so sweet to never complain about my ginormous fat butt, if he finds out I'm the number one World's biggest weirdo, he might not stick around... I'd be so sad, I'd seriously cry forever. Oh, no! I'm totally late! I'm supposed to meet him before school! I'm so lame, ugh. I hope Nick isn't mad. That's about the worst thing that could ever happen!"
— Juliet Starling
Advertisement:

Juliet Starling never had it so good. She's a popular cheerleader at San Romero High School, California. She's smart, athletic, and she has both a supportive family and a cute boyfriend. To top it all off, she's celebrating her eighteenth birthday after school! What could go wrong?

...well, there's the minor matter of a Zombie Apocalypse tearing through San Romero High—which has claimed her boyfriend, Nick, as a casualty. But fear not for dear Juliet: the not-so-average cheerleader has enough knowledge of magic to separate Nick's head from his infected body while keeping him alive. Why? Because she's a zombie hunter, duh.

Armed with her magical chainsaw to keep any grope-happy zombies at bay and aided by the support of her family and her utterly bewildered disembodied boyfriend, Juliet becomes the last line of defense against disgruntled classmate/emo-goth-wannabe Swan and the Dark Purveyors, a group of Rock'n'Roll Zombie Lords who want to rip the entire world's collective head open and gnaw on the brain matter therein.

And if that happens, who's going to help Juliet celebrate her birthday?

Lollipop Chainsaw is a 2012 game from Grasshopper Manufacture, created by Suda51, James Gunn and Tomo Ikeda for the PlayStation 3 and the Xbox 360. Suda wanted to create something different from the standard zombie fare with this game; as part of what he brands "a piece of pop zombie entertainment", zombies explode into bright, multicolored displays of light and glitter instead of blood and gore (instead a mix of the two for the English release). He also tried to push the limits of how much he could blend pop music sensibilities into a zombie-themed Beat 'em Up.