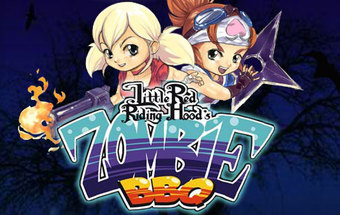 Once upon a time...
Advertisement:

Little Red Riding Hood's Zombie BBQ is a Rail Shooter made by companies Enjoy Up and Gammick for the Nintendo DS in 2008. It is quite possibly one of the strangest and most inventive titles for the system, and not just for its title.

The story: since Little Red Riding Hood and the Woodcutter had killed the Big Bad Wolf, everything went along nicely in the Fairy Tale kingdom... but then something happened. The Woodcutter died and a mysterious plague began infecting the residents of the kingdom, turning them into zombies or mindless monstrosities. Red then, along with her friend Momotaro from the Japanese folktales, decided to stop this Zombie Apocalypse at all costs!