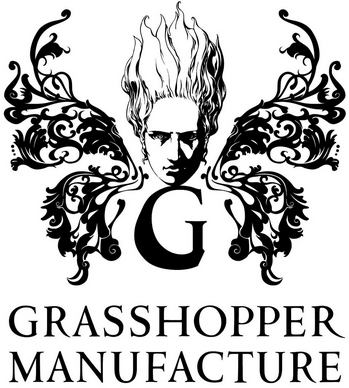 Punk's Not Dead
Grasshopper Manufacture is a Japanese video game developer founded and headed by Goichi Suda (a.k.a. Suda51) in 1998. The studio is well-known for its surreal adventure and action games that focus on stories with a bizarre execution of its ideas. Although a few of their smaller games had received obscure overseas releases, it was with killer7 in 2005 that Grasshopper and Suda achieved worldwide recognition for making games unlike anyone else in the industry. Though their games are of various styles, from Suda's own noir-thriller adventure games, to over-the-top action-comedies, to postmodern RPGs, almost all of them are very distinctive.
Advertisement:

Grasshopper has its origins in Human Entertainment; after the development of Moonlight Syndrome, a tight but small group of Human staff, headed by Suda, formed Grasshopper to develop games that were even more surreal and mature than they were allowed to create under Human. For their first game, they only had about five in-house team members.

They slowly grew in scale as they became more popular. In 2009, Akira Yamaoka joined the company as an audio director, ending his long-time career at Konami. After having achieved even more mainstream success with the No More Heroes series, Grasshopper went through a period from around 2010-2013 where they had hundreds of employees; however, managing such a large company became an intimidating task, and CEO Suda took a step back from being actively involved in development to focus more on business management. During this time, they made more marketable games than they had before, but generally worked under publishers' demands for their major projects.

In 2013, the company was acquired by GungHo Online Entertainment, who would publish Let It Die in 2016. They also downsized heavily around this time to a company of only around 35 employees. Due to these changes, Suda was able to become more active in development again and the company was freer to pursue lower-budget experimental projects again, such as remakes of their older, previously Japan-only works. In 2021, GungHo sold Grasshopper to Chinese company NetEase Games.