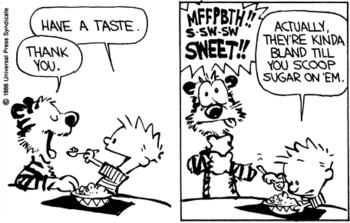 In fiction, breakfast cereals marketed as "for kids" are invariably loaded with ridiculous amounts of sugar and contain virtually no nutritive value whatsoever. This stands in contrast to the cereals marketed for adults, which are depicted as being healthy — and about as tasty as eating the cardboard box they came in.

Common ingredients of these ridiculously-sugary kid cereals include:

Given all this, it's a mystery why parents even buy these cereals for their children in the first place. Perhaps they're just capitulating to the kids' demands.

It was Truth in Television a few decades ago. It started rather innocuously — back then, you had to add sugar to your cereal yourself, and pre-sweetened cereals would proudly advertise that they already added the sugar for you (starting with Sugar Crisp in 1949). Then advertisers discovered kids' natural sweet tooth and started targeting them, giving us many many brands of proudly sugary cereals, some of which you might recognize today (e.g. Sugar Corn Pops, Sugar Frosted Flakes, or Sugar Smacks) without the "sugar" bit. By The '70s, they were alarmingly sugary; a 1978 study of 78 different brands of cereal found that 11 had a sugar content over 50%note The worst was Super Orange Crisp, with 70.8% sugar content. That led to health concerns and a push to make cereal healthier. The upshot is that while modern cereals certainly advertise themselves this way, and they're still pretty sugary, they also tend to be fortified with extra vitamins and minerals (although every cereal does that these days).

See also Unfortunate Ingredients, which may or may not include sugar.