Comic Strip / Phoebe and Her Unicorn 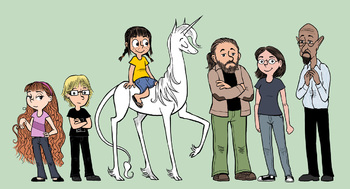 The main cast. Left to right: Dakota, Max, Phoebe, Marigold, Dad (aka Ethan), Mom (aka Emily), and Mr. Hart.
Dakota: ...whoa.
Marigold: Yes, bask in my wonderfulness.
Phoebe: This is less charming when you've heard it a couple times.
Advertisement:

Phoebe and Her Unicorn is a newspaper comic strip by Dana Simpson, and made its debut as Heavenly Nostrils on Go Comics.com

in April 2012 as a webcomic. In January 2015, the comic assumed its present title; on March 30, 2015, it was relaunched as a syndicated comic in nearly a hundred newspapers.

It begins when 9-year-old Phoebe Howell skips a rock across a pond and accidentally hits a unicorn in the face. Freed from her own reflection, the unicorn — named Marigold Heavenly Nostrils — grants Phoebe one wish. After her impractical requestsnote infinitely more wishes, infinite dollars, and super powers are denied, Phoebe wishes for Marigold to be her best friend. But can a vain mythical beast and a nine-year-old daydreamer really forge a connection? (Spoiler alert: Yes, and their Odd Friendship becomes the heart of the strip.)

The strip has been compiled in a series of collections. An original graphic novel, Phoebe and Her Unicorn in the Magic Storm, was published

in 2017. A second, Phoebe and Her Unicorn in Unicorn Theater, followed

that Nickelodeon had won a bidding war to create an Animated Adaptation of the strip.

Now has a character sheet in need of work.

Phoebe, her unicorn, and their tropes:

I wrote a story about us called Phoebe and Her Unicorn?
Marigold: As if I am anyone's unicorn.