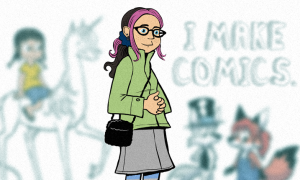 Dana Claire Simpson (formerly D.C. Simpson) is the creator of the web comics Ozy and Millie, Raine Dog, and Phoebe and Her Unicorn (formerly Heavenly Nostrils), among others. Ozy and Millie was the most noteworthy of her early creations, having been given semi-mainstream attention as a long-running web comic and published in book form by indie publisher Plan 9.
Advertisement:

She dabbled in political comics with I Drew This!, which espoused her liberal political views. She attempted political allegory in 2009 with Raine Dog, a comic deconstructing the relationship between anthropomorphic animals and humans. Abandoned and later rebooted, negative fan response and time pressure from other projects eventually caused it to become an Orphaned Series.

In 2009, she won Amazon.com's "Comic Strip Superstar" contest with Girl, a comic about a young girl. This was a somewhat underdeveloped concept created specifically for the contest, which recycled some material from Ozy and Millie. The comic went through a prolonged development process before being retooled into Phoebe and Her Unicorn. It is currently syndicated by Andrews McMeel Universal on Go Comics, with a second book released at the end of May 2015 and newspaper release at the end of March 2015.

Tropes which appear in her works: