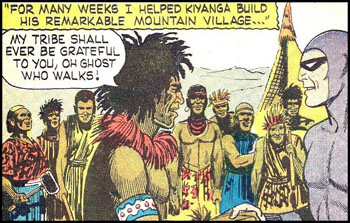 "When they put together this costume I said, 'Imagine an African, white Christ from space.' And this is what they came back with: An African white space Christ. Well, that's just the concept, you know, obviously and I'm not saying I'm African white space Christ, that's not for me to say. That's for other people to say. It's for other people to say if they think I'm like Jesus."
— Aldous Snow, Get Him to the Greek
Advertisement:

A common trope in 18th and 19th century adventure fiction, when Europeans were visiting and documenting vast swathes of the world for the first time, Mighty Whitey is usually a displaced white European, who ends up living with native tribespeople and not only learns their ways but also becomes their greatest warrior/leader/representative. In cases of the first and second, this trope can heavily overlap with Led By The Outsider. Extra points if he woos The Chief's Daughter along the way; an unfortunately common variation that perpetuates into present-day media is that she will continue to love our hero even if he is directly responsible for the death of her husband, brother, or father.

Sometimes the foreign societies are shown to be realistic, three-dimensional and actually rather pleasant places to live. Indeed, sometimes the native peoples are shown to be better in some way than European society and the white man begins to despise his old home. All this is a setup for the white man to adapt to the Native's ways, thereby making him superior both to the natives and the Europeans back home. In modern-day fiction, sometimes the Mighty Whitey is there to lead or inspire the Hollywood Natives or bring some aspect of modern technology or knowledge to their aid, something they presumably could not do before he showed up. One particular version has it so that the sympathetic Author Avatar whitey is not only now the Great White Hope for the non-white Noble Savages, but is very often defending them from other evil whites.

In modern-day fiction — particularly in Hollywood movies — Mighty Whitey pops up as the result of creative types trying to appeal to as broad a cross-section of society as possible to get their cash back. And since the majority of major Hollywood stars are white Americans (despite the fact that only a small minority of their audiences are Americans at all, let alone white Americans), it's almost inevitable that the all-singing, all-dancing hero is also going to be registering low on the melanin count... which can become a self-perpetuating mess.

Of course, these writers might also just be doing the respectable thing, and be writing what they know. Perhaps not in the 'I'm a badass Adventurer Archaeologist' sense, but in the 'I'm used to the cultural norms of my race/gender and would be terrified of offending people with incorrect cultures cues' sense. Or in the 'What I know has been mostly informed by what has already been established in fictional story-telling and I'm subconsciously perpetuating those same pas' sense. Often involves a strong element of wish fulfillment for the First World writer and First World audience, in the sense of, "I'll bet I could be a great hero if I could just escape this straight-laced and boring 'civilized' world I'm stuck in." Or it might be a combination of their or the audience's preference for a protagonist that looks like themselves combined with the natural desire to see the protagonist become the Chosen One.

Remakes of shows/movies with the original trope often subvert this; for instance, making the Mighty Whitey into a dunce, and their Ethnic Scrappy sidekick into a smart, street-savvy badass. This trope can also occur as an unintended side effect of writers trying to show the equality of all races and cultures — in a tone-deaf and more than potentially offensive kind of way.

Non-American media can exhibit versions of this trope tailored to their home audiences (e.g. the awesome guy in an Anime/Manga series being Japanese). But Not Too Foreign is often used as a way to set up this version of Mighty Whitey.

Can be a Justified Trope as it did happen in real life. Explorers from a technologically more advanced civilization had access to nutrition, education, technology, and general skills and experience that a native who never traveled further than the neighboring village didn't. Especially as only those who were already among the strongest and bravest in their home countries did have the courage and motivation to become explorers in those dangerous times. The Unfortunate Implications came in when people began to assume that they were better because of their culture, beliefs, or genetic stock, rather than access to tools and benefits derived from hundreds of years of accumulated advantages.

As the following examples will show, the trope tends to be used pretty liberally, especially because of the historical difficulty of defining the term "white" (i.e., whether it should primarily refer to Europeans, Caucasoids, or simply light-skinned people). It's most convenient to define this trope as a "modern" character achieving mastery over "ancient" or "backward" characters, not necessary with respect to race per se.

See also White Male Lead and (especially) Going Native. Compare The Man Is Sticking It to the Man and Born in the Wrong Century (similar tropes but removed from race), Mighty Whitey and Mellow Yellow and Instant Expert. Contrast Flawless Token, Token White, Evil Colonialist, and White Man's Burden. The inversions are Majored in Western Hypocrisy (for when a character from a less "civilised" race receives training from his overlords and frequently ends up using it against them) and Pretty Fly for a White Guy (for when a white or analogous character's aping of a different culture is treated as ridiculous and/or offensive).

In fantasy works, Planetary Romance and Lost World stories are likely to have a similar theme, where the hero from Earth ends up being a better Mongonian or Skartaran or Pandoran than the natives themselves (often the alien world will have lighter gravity, hence making the Earth guy a Heavy Worlder with Super Strength). Many alien super heroes provide a variation in that they usually come from some more advanced society, go native on primitive Earth, and become heroes here. Isekai stories will often feature something similar, especially if it's set in an RPG Mechanics 'Verse, with the hero from Earth receiving skills and abilities that far exceed those of the natives because they're The Chosen One and not due to any actual skills or talent on their part.