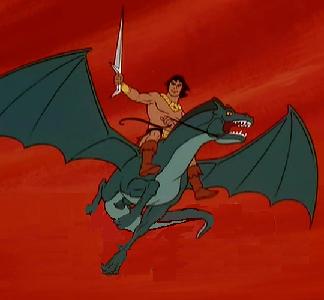 "John Blackstar, astronaut — is swept through a black hole — into an ancient alien universe. Trapped on the planet Sagar, Blackstar is rescued by the tiny Trobbit people. In turn he joins their fight for freedom against the cruel Overlord — who rules by the might of the PowerStar. The PowerStar is split into the PowerSword — and the StarSword. And so, with StarSword in hand, Blackstar, together with his allies, sets out to save the planet Sagar. This is his destiny."
"I am John Blackstar."
—Opening Narration
Advertisement:

Blackstar is a 1981 fantasy-adventure cartoon from Filmation. A precursor to the far more successful He-Man and the Masters of the Universe (1983) (only 13 episodes were produced), Blackstar followed the adventures of an Earthly astronaut, the eponymous John Blackstar, and his "allies": Klone, the elf-like ShapeShifter; Mara, the lavender-skinned Magical Girl; Warlock, his dragon-like Cool Steed; and the Trobbits, seven magenta-skinned little men who tended the Sagar tree on which the planet's environment depended — Balkar, their magical leader; the speechless Poulo; Carpo; Gossamer, who flew by means of his huge ears; Burbil; Rif, who talked like Walter Brennan and whose hat was permanently afire; and Terra. All these were in rebellion against the Overlord and his allies, such as the sorcerous Vizier, a horde of dinosaur-shaped stone robots, the Lavaloks, and a series of one-shot villains such as Kadray, the Time-Lord (no, not that one).

Interestingly, the eponymous hero was designed as an African-American (this was in keeping with Filmation's predilection for socially positive messages in its shows), but was subsequently changed to a deeply tanned Caucasian. It has been asserted that this was done at the behest of the network, but Filmation producer Lou Scheimer has disclaimed all memory of any such directive. Many fans assume that Blackstar is a Native American, but there is no mention of this in the original series, and he differs somewhat in appearance from Filmation's later Native American hero, Bravestarr.