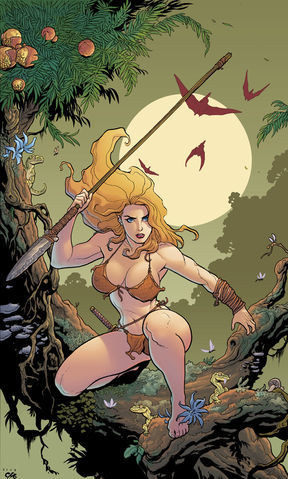 "Me only simple jungle princess. What mean this word, 'kiss'?"
— "I Love a Film Cliche", A Day in Hollywood, A Night in the Ukraine
Advertisement:

The Distaff Counterpart of Tarzan of the Apes, this is a young woman of European extraction who has been raised in a jungle environment, usually by animals. Despite her upbringing, though, she has managed to grasp the basic rudiments of English, tools, and fashion — she is frequently seen wearing fetching leather or Fur Bikinis and wielding a spear. She is far more likely to have neat hair than Wild Hair, and her legs and armpits will be inexplicably hairless. She's likely to be an Earthy Barefoot Character.

For some unfathomable reason, the animals of the jungle obey her slavishly instead of viewing her as lunch, and the woefully benighted Hollywood Natives treat her as a goddess. If the Jungle Princess is particularly naive, she'll buy into that belief. Even if she's not particularly naive and although she may well possess some fearsomely strong instincts and drives toward it, her isolation from humans has left her with no concept whatsoever of romance.

Inevitably she will be single when she first encounters a hunky American or European explorer. She will find him in the clutch of some local danger (being menaced by her tame leopard is always fun if it's a romantic comedy), rescue him, and romance will ensue. While the movie version of the Jungle Princess will let her explorer bring her back to his home and 'civilize' her, the TV version will insist on staying in the jungle, and so our hero will settle down in a nice treehouse and steal kisses from her when she's not busy ordering her lions to savage the occasional poacher.

In science fiction, many a Green-Skinned Space Babe is just a jungle princess with a dye job and a ray gun.

The trope name ultimately dates to a 1920 silent film serial called The Jungle Princess, but its common usage probably dates from the 1936 film of the same name starring Dorothy Lamour. The trope itself is older than that, though, with possibly the first example being Rima from W. H. Hudson's 1904 book Green Mansions.

See Nubile Savage, which is her default appearance. Compare Handsome Heroic Caveman. Not to be confused with The Chief's Daughter, where the leading lady actually fits the native culture (but is almost always called a princess for some reason).

Candace really has embraced Africa - and how!

Candace really has embraced Africa - and how!