"Jump Off a Bridge" Rebuttal 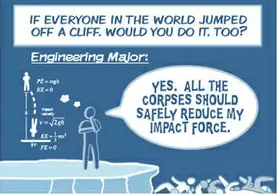 Well, he's not exactly wrong.
Jimmy: But, Dad! All my friends are gonna be there!
Hugh: I know, son, but if all your friends were named Cliff, would you jump off them? I don't think you would.
— Jimmy Neutron: Boy Genius
Advertisement:

It's a familiar scenario. Kid wants something from parent they know won't be easy to get, or the parent just said no to it. The first argument they make is almost always, "Everybody else is going to that concert!"/ "All my friends have this body part pierced!"/ "Everyone at my school is wearing one!" or something similar.

The first rebuttal the parent makes in defense will inevitably be, "So, if the whole world/ your whole school/ all your friends were going to jump off a bridge, would you jump, too?"

The response will most likely be one of three, in increasing order of frequency:

Perfect set-up for a You Are Grounded! or Can't Get Away with Nuthin'. Pertains to Peer Pressure Makes You Evil.

Variations occur where the players are not parents and children, but the pattern is always the same. "Cliff" may also be substituted for "bridge." Another variation is "If X told you to jump off a cliff, would you?" or "If all your friends stuck their heads in the oven, would you do it?"

If this is used on a sufficiently smart-assed character, they are likely to invoke Analogy Backfire by finding a reason why they would jump (such as "Ever heard of BASE jumping?"note The B in BASE actually corresponds to buildings. Bridges fall under S: spans). Dumber ones may do it by accident. For a brief period in the 90s, the most common response was to say something along the lines of "No, bridge-jumping is tomorrow," and explain that the kid character was also participating in bungee jumping.

One increasingly common rebuttal is Don't Ask, Just Run: as most of one's friends — on account of being alive — can likely be considered both relatively sane and afraid of heights... what is more likely: that they all went suicidally insane at the exact same time, or they all noticed the bridge is on fire/about to collapse/explode?

Not to be confused with explicitly telling somebody to "Go jump off a bridge".

Contrast The Complainer Is Always Wrong.