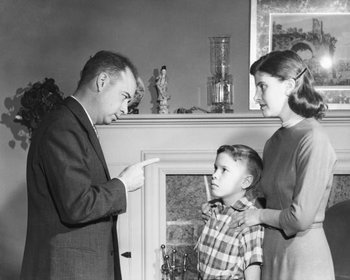 "That does it, buster. No Radio Tropes for a week."
Eddy: What happened to the stairs?!
Ed: My parents took 'em down 'cuz I am grounded.
Edd: That's disturbing.
— Ed, Edd n Eddy, "3 Squares and an Ed"
Advertisement:

Teen (or younger) character is grounded at an inopportune time (usually near the end of Act 2). Often, the person doing the punishing doesn't have an exceptional reason, or just has a sense that the teen is out of control and needs to calm down (or that the younger character has misbehaved or otherwise did something wrong). So they restrict the youngster's social life for a time by banning them from leaving the house and/or having friends over. Of course, if the character is of school age and the grounding takes place during term time, chances are they will be allowed out to go to school - unless they have also been suspended or expelled.

The punished character usually sneaks out the window or similarly blows off the punishment to finish off the story. After the story is completed, the grounding or suspension is never mentioned again. Similarly, if a character is grounded at the end of an episode, you can expect that in the next episode, said grounding will no longer be in effect, or mentioned at all.

The grounding is the one common absolute that links every television show (especialy sitcoms), cartoon, network, production company, and franchise in history and beyond together. It is the Iron-clad law of film, television and print. It is the snake biting its own tail, as the groundings of real-life are influenced by the groundings of media, and vice versa.

The kiddie version of Turn in Your Badge. A possible consequence of being Caught Coming Home Late. If the punishment is blatantly excessive, it's Grounded Forever.

Truth in Television as parents do ground children and teenagers for bad behavior or conduct. Stricter parents, especially in older time periods, are also liable to say Don't Make Me Take My Belt Off!.

Note: There is one situation where an adult will be told this with a straight face: Pilots who, either due to misconduct or more mundane circumstances (such as bad weather), are restricted from flying. In the punitive variations, this is actually either Turn in Your Badge or being made to be a Desk Jockey.

The Martins get GROUNDED!!!

After a series of incidents gets ugly at school, the Martins are grounded by their mother in the single worst grounding ever recorded in the history of history!

The Martins get GROUNDED!!!

After a series of incidents gets ugly at school, the Martins are grounded by their mother in the single worst grounding ever recorded in the history of history!