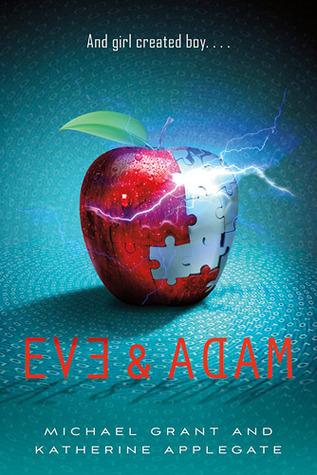 I'm thinking of an apple when the streetcar hits and my leg severs and my ribs crumble and my arm is no longer an arm but something unrecognizable, wet and red.
— The book's opening line
Advertisement:

Eve and Adam is a collaboration between Creator Couple Katherine Applegate and Michael Grant, co-authors of Animorphs, Everworld, and Remnants. It focuses on Evening Spiker, who gets in a car crash that threatens to kill her... except that she's mysteriously fine after a few days. Terra, her mother and the owner of the hospital where Eve is staying, wants to keep her in the hospital for longer, and so to keep Eve from being bored, her mother gives her a project: to genetically engineer the perfect boy, Adam. The book is told in a dual perspective between Eve and Solo Plissken, who worked for Eve's mom at the hospital ever since his parents were killed in a car crash. He knows that there's more to the project than keeping Eve busy, and with her help, he uncovers some horrifying secrets of the hospital...

Eve and Adam provides examples of: