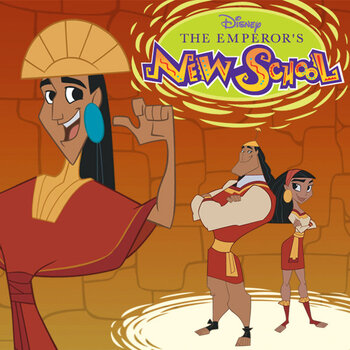 Kuzco, the main character, is still an obnoxious self-centered emperor (in spite of how the movie ended) who has been temporarily dethroned and must attend The Kuzco Academy and pass all his classes to become Emperor, as you can't become one without finishing school. The Kuzco Academy is run by Principal Amzy, a Paper-Thin Disguise for Yzma, the series villain, which fools no-one except her handsome but dim lackey Kronk.

Yzma wants to usurp Kuzco's throne which, given her controlling personality, wouldn't be good and thus schemes to prevent Kuzco from passing his classes—at first by transforming him into all sorts of different animals. In Season 2, she finds an evil hall of evil machinery. Luckily for Kuzco, he has Malina — straight-A student, cheerleader, and "Hottie-Hot-Hottie" — as well as his foster family of Pacha, Chicha, and the kids to help him out. Occasionally Kronk, too.

Usually the episodes center around teaching Kuzco some sort of Aesop, though it started to get away from that later in the run. The show has also been known for recycling gags from the movie.

It has the honor of being one of the last Disney animated shows for ABC before they switched to educational blocks. This was also one of the last works of Eartha Kitt, who, sadly, passed away just over a month after the show ended.

Frogs Can Stick to Walls

Yzma has a plan to capture Kuzco, who's a red-eyed tree frog. Too bad Yzma doesn't know that frogs can stick to walls and hear secret plans.

Frogs Can Stick to Walls

Yzma has a plan to capture Kuzco, who's a red-eyed tree frog. Too bad Yzma doesn't know that frogs can stick to walls and hear secret plans.