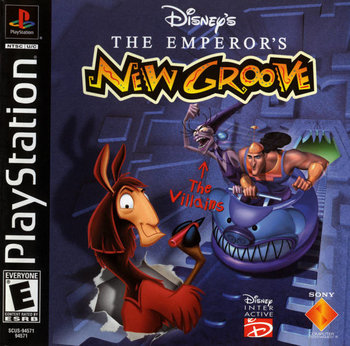 A Licensed Game licensed based on the atypical Disney film of the same name. It was developed by Argonaut Games for the PlayStation and Microsoft Windows, and by Sandbox Studios for the Game Boy Color.

It is a Platform Game that loosely follows the plot of the original movie: When Evil Chancellor Yzma's attempt to assassinate the selfish Emperor Kuzco goes wrong, he is transformed into a llama and ends up in Pacha's village. They're forced to team up and go on a dangerous trek through the jungle so that Kuzco can reclaim his throne and get the potion that can turn him into a human again. Like its source material, the game is self-aware and likely to poke fun at some of its tropes.

The PS1/PC version of The Emperor's New Groove game provides examples of:

The GBC version of The Emperor's New Groove game provides examples of: