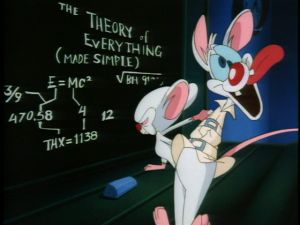 "One is a genius, the other's insane!"
Baldrick: I've been in your service since I was two and a half, my lord.
Blackadder: Well, that must be why I'm so utterly sick of the sight of you.
— Blackadder, "Bells"
Advertisement:

The seemingly annoying and incompetent sidekick for another character — usually an Unsympathetic Comedy Protagonist — who barely tolerates him. The only talent a Bumbling Sidekick has is the ability to tolerate any amount of abuse — and he needs it, given how often his "friends" are yelling at him and throwing him face-first into walls.

Some Bumbling Sidekicks are delusional and think they are appreciated, which is why they put up with the abuse they get. Others are just too desperate for friendship and/or money to leave.

They tend to have extreme luck — either they're the resident Butt-Monkey, or they reap all the benefits of other characters' hard work, which makes everyone resent them even more.

This trope is Older Than Steam, possibly originating in Italian Commedia dell'Arte plays.

Often overlaps with Minion with an F in Evil, Cowardly Sidekick, or The Friend Nobody Likes. They are almost always the Nice Moron in a Smart Jerk and Nice Moron pair. If their stupidity includes rushing into danger unprepared, they're also a Reckless Sidekick. If a villain has two of these, they're a Bumbling Henchmen Duo. Compare and Contrast with the Hypercompetent Sidekick.