Film / Jingle All the Way 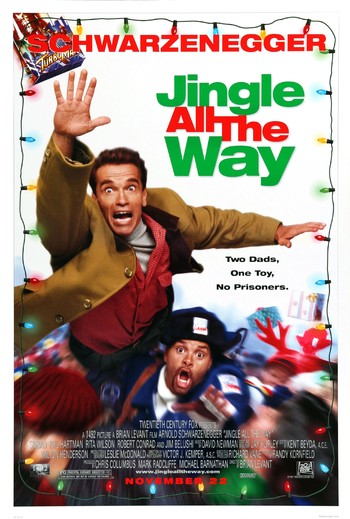 Workaholic mattress salesman Howard Langston (Schwarzenegger) is a constant disappointment to his son Jamie (Jake Lloyd). After missing his son's karate practice yet again, to compensate for this own Bumbling Dad nature, Howard decides he is going to get Jamie the toy he really wants for Christmas: A Turbo Man action figure. Unfortunately, the Turbo Man action figure is the hot toy of the season and is in short supply, and Howard has waited until Christmas Eve before trying to find one. Subsequently, he finds himself competing with crazed mailman Myron Larabee (Sinbad) and massive crowds of other parents to get the same toy. What follows is a comedy of errors as both men race to get the toy.

It is also the last comedic role for Ah-nold, and one of the last for Sinbad. The film is based on the holiday crazes for both Cabbage Patch Kids dolls and Mighty Morphin' Power Rangers toys.

A Direct to Video "sequel" was released in 2014, starring Larry the Cable Guy.

open/close all folders
First Movie
"It's a Wonderful Life proved that everyone has value. Home Alone showed everyone why we shouldn't take family for granted. But one holiday film will teach us Christmas turns everyone into an asshole."
Jingle All The Way 2

You can always count on me!