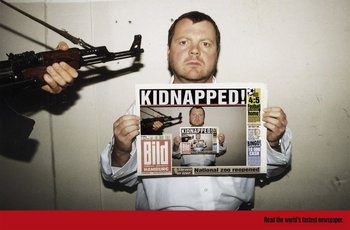 This is more recursive than most examples.
"Remember to write us every day, and don't forget to include a photo of yourself holding up that day's newspaper."
— Roseanne, Roseanne, "Springtime for David"
Advertisement:

The easiest way to prove that a photograph or video was taken recently is to make sure that it includes a recent newspaper, with the date and at least one article prominently visible. Since the front page of a newspaper is finalized mere hours before it is printed, it's impossible to accurately fake a newspaper from the future. Often this is a photo of a hostage or kidnap victim, and is being used to prove that they were still alive as of the newspaper's print date.

While it can be done to try to prove a photo is old rather than recent, it's not nearly as reliable, especially if the photo is in black-and-white rather than color. Newspapers yellow over time unless carefully stored and handled, but they don't simply disappear; it's easy enough to get a paper from last week or ten years ago, if you want to include it in a photo you take today.

Might be a Discredited Trope nowadays with the power of Photoshop and computers.

See Newspaper Dating for a slightly more science-fictional use of dates on newspapers.

The newspaper doesn't actually prove anything, since getting a newspaper from years ago, putting it in a box, and burying it under your patio, without a trace, is merely very very difficult, not impossible. The ring is actually better proof, since she has seen her ring recently, and knows the patio hasn't been disturbed since it left her possession.