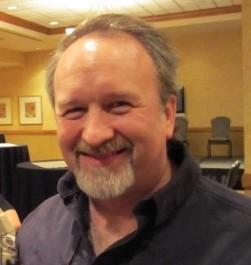 ) is a Science Fiction and Fantasy author probably best known for his contributions to the Star Wars Legends and the BattleTech Expanded Universe, but who has a number of original novels to his credit, mostly Low Fantasy with the occasional High Fantasy for good measure.

Stackpole got his start designing Tabletop RPGs; in 1990, he wrote a report called the Pulling Report

, to respond to Patricia Pulling and others who claimed that such games were gateways to Satanic cults.

Around then, he started writing in the BattleTech universe, contributing a number of novels and two distinct trilogies, along with the "Wolf and Raven" short stories for fellow FASA setting Shadowrun.

In the mid-1990s, Stackpole was tapped to join the Star Wars Expanded Universe (now Legends), in both novels and comics. In contrast to most authors working in the universe at the time, who focused on Luke, Leia, Han, and epic galaxy-spanning plots, Stackpole pulled back, and told stories that were smaller in scale: the X-Wing Series, focusing on Ascended Extra Wedge Antilles and the elite Rogue Squadron. After trading off with Aaron Allston for a couple of novels and contributing a few short stories, Stackpole turned to the Jedi Academy Trilogy, writing the standalone novel I, Jedi starring his original character Corran Horn. He was on the planning board for The New Jedi Order after Del Rey took over the license and wrote the Dark Tide duology (cut down from a trilogy, which meant several ideas were scrapped), but hasn't returned to the universe since. Unless you count The Reenlistment of Baron Fel...

During and after that, Stackpole has continued to write original-setting fantasy novels, including Talion: Revenant, the "DragonCrown War" series, and most recently, the "Age of Discovery" series, notable for containing Fantasy Counterpart Cultures of Chinese and Aztec civilizations pre-Columbus instead of the standard Medieval Europe. He's also written a short story and a novel about a superhero named Coyote or Revenant who acts outside the rules of traditional superheros. Revenant also appears as a character in PS238.

Stackpole is known to be friendly with Timothy Zahn, which shows in the interplay between their novels; Zahn is on record that someday—someday—he'll beat Stackpole at Star Wars Trivial Pursuit. Likewise, he and Aaron Allston were on good terms before the latter's death, which developed when Allston continued the X-Wing Series and needed to ask Stackpole questions. Generally speaking, all Stackpole's Star Wars books include lots of Continuity Nods, Call Backs and Call Forwards to pretty much every other Star Wars Legends book that was in existence at the time each book was written.

In addition to writing novels, Stackpole is involved in Podcasting, and has appeared at conventions on podcasting discussion panels. He also hosts con seminars on writing and worldbuilding techniques.

There is an optional rule in BattleTech to occasionally have a mech's fusion engine explode if it takes damage. This rule is unofficially known as "The Stackpole rule," and the act of exploding as "Stackpoling," after his predilection for having this happen in his books.