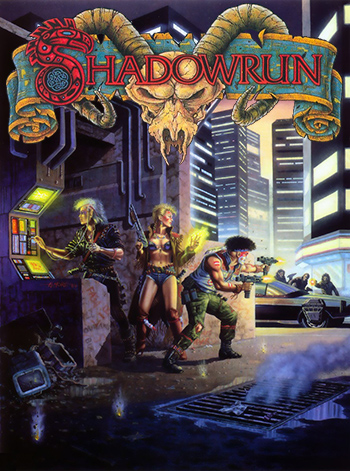 Where Man meets Magic and Machine.
"Watch your back, shoot straight, conserve ammo, and never, ever, cut a deal with a dragon."
Advertisement:

Shadowrun is a Tabletop Game from FASA straddling the Cyberpunk and Dungeon Punk genres. It is set, depending on the edition, in the mid- or late 21st century, after magic returned on December 21, 2012, as it had more than once in the distant past. Dragons and other mythic beasts awoke from eons-long slumber; many humans gained magic and/or mutated into new, yet familiar species. The Native Americans were the first ones to use magic on a greater scale, and they used their newfound power to retake most of the western North American continent. The real movers and shakers, though, are the megacorporations, who have achieved extraterritorial status and are now, edition depending, exempt from the majority of laws or virtual nations unto themselves. In this world, the players are Shadowrunners; freelance operatives who take jobs that corporations, governments, and other entities prefer not to handle themselves — and occasionally, they handle the ones those entities can't.

Shadowrun handily became the most popular cyberpunk role-playing game, a fact which pisses off genre purists to no end. Video game adaptations of the setting were made for both the Sega Genesis and Super Nintendo Entertainment System in the 90's. The two were very different from each other. The Genesis version was considered a classic for its console, while the less-popular SNES version is thought of as one of the console's hidden gems. There was also a Japan-only game for the Sega CD. Another adaptation, a team-based FPS for the Xbox 360 and PC, however, has been much less well-received. The primary reason you will find it referenced is the rare use of cross-platform multiplayer between the 360 and PC versions. (This game is also the reason for its rarity, as gameplay was unbalanced in the favor of PC players due to superior controls.) A new game started getting funding

open/close all folders
A-D
There is a common thread to all of these things—the rapport de force. That’s French for “who has the biggest dick.”
Geez, Axis. Way to stir the pot. Safe to say not everyone shares your beliefs.
E-M
N-R
S-Z