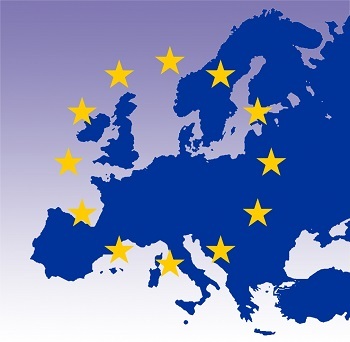 This is when all of Europe becomes united under a single powerful government that either supersedes or in extreme cases supplants the traditional national governments of Europe. Usually, the government in question takes the form of an expanded version of The European Union, or is a clear Expy thereof. This trope is often found in stories that take place 20 Minutes into the Future.

The dream of a United Europe was very real in the 1950s after World War II — the idea of the mainland throwing off prejudice and becoming one massive super-country. There is also presumably a connection being drawn by some people with the rise of the USSR and USA — to them, it 'makes sense' that there should be a United States of Europe to join it. Today, that 1950s dream is more widespread than it has ever been, but, naturally, blocks still remain - like the fact that Europeans have been kicking the hell out of each other for 2500 years and have only really considered stopping since 1945. Looking back through history, it's hard to find a period of more than a couple of years in a row in the last millennium when there wasn't a war in Europe, with the likes of England vs Scotland, England vs Ireland, England vs France, England vs Spain, Spain vs the Netherlands, Spain vs France, Spain Vs Portugal, Denmark vs Sweden, Sweden Vs Norway, Poland vs Germany, Poland vs Russia, Russia vs Germany, Germany vs Austria, Germany vs Germany, and the usual internecine Balkan strife, rolling around with such regularity that they practically qualify as annual derbies. More recent editions include Everyone vs Germany and Everyone vs Russia.

As a result, a lot of previous attempts to unify Europe have been through force: See Charlemagne, Louis XIV, Napoléon Bonaparte, and Adolf Hitler as attempts to violently unify Europe, or at least, large parts of it. Oh yeah, there's also Ancient Rome, which actually succeeded in unifying much of what is now southern and western Europe and was the example many of the aforementioned leaders sought to emulate. As a result, there are a lot of grudges that are centuries, even millennia, old, and a lot of fearsomely independent-minded states that are exceptionally jealous of their sovereignty.

In Real Life, the European Union is a free-trade area that has gradually evolved to include 'common policy' in areas such as agriculture, standards, border controls, etc etc etc, and has many characteristics of a federation, like a common currency throughout most member states,note Most of Scandinavia is in the EU but not the Eurozone an elected parliament, a motto note ("United in diversity"), an anthem

and a court of justice (while technically, it remains at best a confederation due to states remaining independent). While some have called it a de facto federation

, it is still a long way off being one country, and there is still a great amount of debate about the subject between people who are opposed to expanding the European Union's power - or even want to see it rolled back in certain areas (called Eurosceptics) and those who are in favour of further political integration (called Eurofederalists). Likewise, there is debate on exactly how the EU is supposed to be run, considering how its structure is unlike that of the USA.

A recurring phenomenon in this trope, especially if the creator is British or American, is that Britain will not be part of a United Europe, even well before Britain actually left the European Union in 2020.note Prior to the 2016 referendum approving Leave, although Britain was considered the most Eurosceptic country, the political and business elites strongly supported continued EU membership and had always been willing to go along with EU integration - albeit usually with opt-outs from certain measures. Oddly enough, the very independent and politically neutral Switzerland, as well as Norway (neither of which were ever in the EU) rarely get the same treatment. It should come as no surprise therefore that this trope varies depending on who's making the work in question. Another recurring phenomenon is that the capital of the United Europe rarely stays as Brussels, usually moving to Paris or Berlin, probably because audiences can easily recognize these landmark-heavy locations over the less-visited Brussels.

Whether this is destined to be Truth in Television or not, as well as whether it ought to be, depends on who you ask. It remains a very contentious issue on both sides. Let's just say that the EU isn't especially popular with 51% of the UK (especially after the three and a half year process of Brexit that took down two Remain-supporting Tory administrations and led to the December 2019 general election being the also Remain-supporting Labour Party's worst electoral performance since the 1930s), or present-day Greece. In Germany, on the other hand, it is essentially considered to be general knowledge that only fascists and "right-wing populists" would ever criticise the EU. Everywhere else, the mention of it being a good/bad thing can spark a rather fierce argument down at the pub if you aren't careful. Rule of Cautious Editing Judgement may well apply.