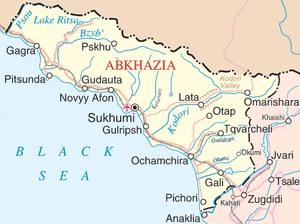 Abkhazia (Abkhaz: Аҧсны́ Apsny, Georgian: აფხაზეთი Apkhazeti, Russian: Абха́зия Abkhа́ziya), officially the Republic of Abkhazia (Abkhaz: Аҧсны Аҳәынҭқарра Aphsny Axwynthkharra, Georgian: აფხაზეთის დე ფაქტო რესპუბლიკა Apkhazetis de facto Resp'ublika, Russian: Респу́блика Абха́зия Respublika Abkhа́ziya) is a breakaway de-facto republic located at the eastern tip of the Black Sea and immediately to the south of the Caucasus Mountains. Most of the international community recognizes the region to be a part of Georgia, but Russia, a few of its alliesnote  Nauru, Nicaragua, Venezuela and Syria, plus fellow breakaway countries Republic of Artsakh, South Ossetia, and Transnistria, think otherwise. While this can be chalked up to yet another puppet state of Russia and that morality would dictate for Abkhazian and Russian authorities to give in to Georgia, the situation in Abkhazia is quite different than, say, South Ossetia (which was made an independent entity very recently) and solving the issue is indeed very controversial because...the Abkhazians have as much history in the Caucasus as the Georgians have.

For instance, the Abkhazians and their language belong to a different, though as old, Caucasian tribe than the Georgians; while the Georgian language is part of the Kartvelian group, the Abkhaz language belongs to the Northwest Caucasian group, making it related to the Circassian languages, and both are equally unintelligible to each other. The Abkhaz also gave their name to a kingdom which existed around 200 years before its eventual union with other Kartvelian kingdoms; while prescribing actual demographic situation of that kingdom today is politically-motivated due to the conflicts mentioned below, most agree that the Abkhaz had a majority, although Georgian was the state language, primarily because the Caucasian tribes wanted to distance themselves from the Byzantine Empire as far away as possible by discarding Greek, and Georgian, being the most dominant of the Caucasian tribes, was the obvious choice. However, came the 15th century, and the rising Ottoman Empire had begun to infiltrate and subjugate the Caucasus, providing the Caucasian tribes with the choice of converting to Islam in exchange for a lower tax. Most of them converted, with the significant exception of the Georgians, who remained Eastern Orthodox. Bottomline: the Abkhazians are indigenous to the area, although they (like other Caucasian groups) were a minority compared to the Georgians, who are of different faith than themselves.

This created an interesting history when the Russians came over to say hello.

As you can see, the Russians had been waging war with the Caucasian peoples as part of their rivalry with the Ottoman Empire. Once they won, they promptly expelled a large percentage of the Caucasian peoples who were Muslim towards anywhere but their land as they began the incorporation of Caucasus into their territory. The few Christian Caucasians were spared, including the Georgians, though they didn't get spared from being annexed, either. In all cases, the Russians found out large swaths of unoccupied lands waiting for resettlement, and they soon populated them with their own, Georgians, Ukrainians, Belarusians...basically anyone who is not obviously Muslim. It eventually reached to the point that the remaining Abkhazians (who are now majority Christians, although a few Muslims remained) became an almost invisible minority. To compound this even further, Russification was prominent and the Abkhazians were banned from studying under their own language.

This went on all the way through the breakup of the Russian Empire in 1917, its subsequent restoration (and more annexations) as the Soviet Union in 1917-1921, and its dissolution. The Abkhazian region was treated as an Autonomous Soviet Socialist Republic (ASSR) within the Georgian SSR. This did not ease the suffering of the Abkhazians at all. In fact, the Georgians decided to join the bullying, with Georgianization happening concurrently with the Russification, thanks to Stalin treating the SSR hands-offly (to be fair, he was an ethnic Georgian...). This ended when Stalin died and the Abkhazians finally were able to join their native language. However, 1990 came and there was a headache regarding the position of the ASSR in regard to the SSR in the face of Georgia's seccession, with the Abkhazians wanting to separate into an entirely new SSR while the Georgians wanted otherwise. Georgia, under Eduard Shevardnadze, began a campaign of nationalization, which did not do well with the Abkhazians' leader, Vladislav Ardzinba, who was a hardliner and wanted to secure his nation for good.

Then all hell broke loose.

Georgian troops moved into Abkhazia after accusations of kidnapping by Abkhazian militants, but then the Abkhazians returned with a vengeance alongside other Caucasian groups, militants, paramilitaries, including Cossacks, and drove out the Georgian milita-er no, the whole Georgian population of Abkhazia. The population had just become halved in a span of about three years, and now the Abkhazians finally fulfilled their hope of becoming a majority in their own country-in a very amoral way.

So, Abkhazia drafted up a constitution and officially declared their sovereignty, but no one was going to recognize them, not even Russia, who was given the goodwill to set up peacekeeping forces to enforce order. However, about 15 years later, Abkhazia managed to build up a chance when Georgia was thrown yet into another war in keeping a breakaway state, this time South Ossetia and this time directly against Russia itself. After the war, Russia recognized Abkhazia, and allowed them to take up the enclaves previously administered by Georgia, and received rubles as currency, passport, and other benefits, essentially making them Russian citizens in all but name. Georgia tried to make up for their earlier nationalist regimes by discussing possible autonomy incentives for their two breakaway states, to no avail. But Abkhazia still felt that doing all these to Georgia aren't enough, because six years afterward (2014), a revolution

happened that effectively disenfranchised what remaining Georgians who stay.

It has the world's deepest cave, and also the second deepest: Krubera Cave, having an estimated depth of over 2,000 meters below. And it's 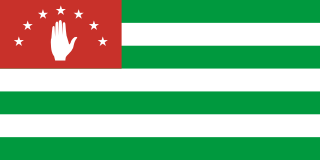 The flag's red canton is taken from the historical flag of the Kingdom of Abkhazia. It features an open right hand which has been a symbol of the Abkhazian nation since a very long time. The seven stars above the hand corresponds to the seven regions that make up the country. Meanwhile, the green and white stripes symbolize the harmonious relation between the nation's Christian and Muslim population.