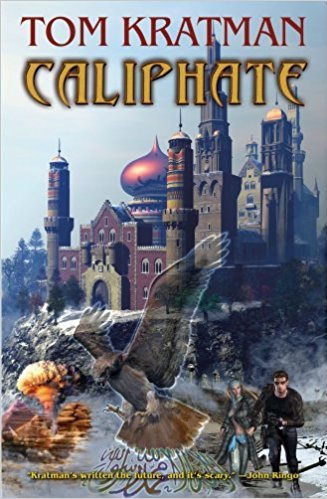 The War on Terror has been lost
Advertisement:

2112 AD. Islamic terrorists have destroyed Los Angeles, Kansas City, Boston, and London with nuclear weapons, and several other cities avoided total destruction due to malfunctioning weapons. After being elected in a campaign whose entire focus is "we're gonna get them" ("them" proving to have a broad definition), a new president launches nuclear missiles at most of Islam's holy cities. The Islamic lands took a long time to recover under a new Caliphate. Meanwhile, the surviving Muslims, through heavy immigration and far greater reproduction rates, take over most of Western Europe save Britain and Switzerland. With a liberal Europe melting away to the Islamic threat, it submits and becomes the Caliphate of Europe and Western North Africa. A strict Sharia law is imposed, many of the boys being forcibly converted to Islam through the Janissary program, and the remaining Christians being made to pay the Jizya, a head tax on non-Muslims. In this background a German girl named Petra bint Minden is sold into slavery, her brother Hans taken to the Janissary corps for training. However browbeaten, she has always dreamed that someday she will be able to escape this living hell, finding inspiration in a diary passed down from her great-grandmother.

Meanwhile, the United States has mutated into an Empire, the Imperial States of America, and it encompasses most if not all of North America, some territories in South America, and the Philippines, where John Hamilton, a US Army officer, suffers a mental breakdown after his fellow Army officer and girlfriend, Laurie Hodge, is killed in a firefight between US and Filipino forces and Muslim rebels. He accepts a transfer to the CIA, now renamed the Office of Strategic Intelligence, where he is tasked with infiltrating the European Caliphate to capture or kill a group of renegade US scientists who are making a super-virus intended to kill millions to advance the Caliphate's cause. And so Petra and Hamilton's paths cross in an effort to save the world, and to ensure Petra's freedom.

Caliphate was written by Tom Kratman, also author of the Carrera's Legions series, the Countdown series and the short story "Okuyyuki", among other works. As such, it is charged with political intrigue and posits a dystopic and controversial future.

The novel is available for free from the Baen Free Library, without any DRM restrictions, here.

Contrast Christian Nation and After the Revolution, similarly speculative political novels featuring an oppressive, near-future fundamentalist government with its own La Résistance valiantly fighting back... But from a standpoint politically opposite where the enemy is an American successor.

Caliphate provides the examples of: