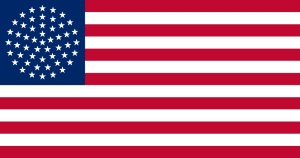 The united fifty one states of America
Advertisement:

In fiction, the USA sometimes gets split up into several successor states, whereas at other times it might get invaded by one or more other powers. And sometimes, it even falls from power. This trope, however, reverses the common factor between the aforementioned three cases (that is, the USA being "weakened"), and instead makes it more... empowered. That is, the USA gains more territory (and more often than not turns those acquisitions into new states).

The trope has four distinct flavors:

The other two flavors are common results of exaggerating standard-flavor Expanded States of America, and can be seen as realizations of Manifest Destiny

Usually, but not always, the resultant superstate would go under a name that is a variation on "United States of America".

A Sub-Trope of Different States of America.

Do not, however, confuse United Space of America for a Sub-Trope, despite what the name's construction may imply; it's about a different topic altogether (though still US government-related).

Sometimes this overlaps with Fictional Province when completely fictional states join the union or are carved out of existing ones.

Notes: This trope does not cover alternate versions of the British Empire that didn't lose the American colonies in a War of American Revolution. That means cases like the Holy Britannian Empire of Code Geass do not count as examples.