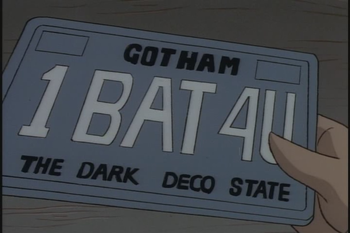 The most awesome state nickname ever!
Advertisement:

This is when Where the Hell Is Springfield? actually has an answer, and that answer is pretty nonsensical even by fiction's usual standards. It's easier to suspend disbelief for made up cities and countries, since there tend to be a lot of those and only the most hard-core geography nerds would have all existing cities or countries memorized. However, American children for instance are taught early on to know all 50 US states (and their capitals), so setting a story in a "state" called New Troy or Calisota can require a lot more co-operation from the audience, as well as leading to Fridge Logic about whether flags in this world have more than 50 stars— and if they don't, what else is different about the states in that world.

These considerations have still not stopped writers as noteworthy as Sinclair Lewis, James Michener, and Thomas Wolfe from creating fictional U.S. states. If the story is interesting enough, and the setting is internally consistent, readers will overlook such details. A fictional state is also less likely to jar the reader than a fictional character elected to, say, the governorship of a real state when the reader can easily look up who the real governor was at the time. It helps that the U.S. has 50 states (and over three thousand counties and county-equivalents), so that readers can easily accept one more; a fictional Australian state might encounter greater resistance.

Of course, this isn't necessarily restricted to US States, as it can apply to the states, provinces, and other subdivisions of other countries as well.

Fictional counties and parishes also count as examples of this trope.