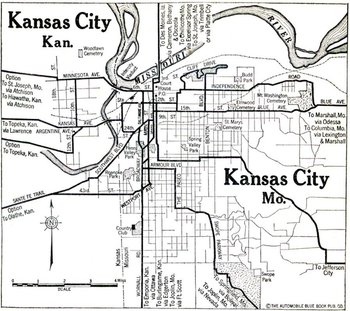 Fun fact: yes, there are two Kansas Cities. And yes, the important one is in Missouri, not Kansas. Don't let anyone confuse you on this.

Despite this, when people refer to "Kansas City," they generally mean the entire metropolitan area, which possesses a population of a little more than two million people between Missouri and Kansas. Certainly, most works of fiction don't make it a point of drawing the distinction between Kansas City, Kansas and Kansas City, Missouri.

The Missouri KC, often nicknamed "KCMO" (pronounced K-C-Moe), contains most of what people think of when they think of Kansas City. That includes the two major sports franchises in the area (Major League Baseball's Royals and the National Football League's Chiefsnote They also have Sporting Kansas City of Major League Soccer, though whether that counts as a "major sports franchise" in the US is up for debate), the architecture and the culture. It features more fountains than any city in the world, save Rome, and more boulevards than any city in the world, save Paris.

"KCK" (the Kansas side) is home to Sporting Kansas City of Major League Soccer and Kansas Speedway, the region's outpost in NASCAR. Many residents of the region live in the absurdly wealthy suburbs on the Kansas side and commute to KCMO proper for work.

The two Kansas Cities are so closely tied together that the Missouri-Kansas border runs straight through the two of them — part of the border is a street literally called "State Line Road".

The city is famous in part for its jazz, in part for its barbecue and in part for its Mafia. Kansas City played a small, but not unimportant role in the country's racial drama during the early-to-mid 20th century. Jackie Robinson, who broke Major League Baseball's color barrier, played with the Kansas City Monarchs of the Negro League before signing with the Brooklyn Dodgers. The Negro League Baseball Museum sits at the famous intersection of 18th and Vine St. where the aforementioned race, crime and music came together. 12th Street and Vine, as the song "Kansas City" suggests, was at one time an even more happening place, but part of Vine was removed, and there's now a park where it used to cross 12th.

Kansas City also plays a small role in film history as the place where Walt Disney began his animation career (It's said that a mouse in his film studio gave him the inspiration for Mickey Mouse). Many of the locals he hired - Ub Iwerks, Friz Freleng, Hugh Harman and Rudolf Ising - went on to successful careers as well.

The city is home to Hallmark greeting cards, which, depending on your outlook dispenses Heartwarming Moments or mountains of sap. Other major international corporations such as Garmin, H&R Block, and AMC Theaters are also based in Kansas City. Sprint was based in KC before being bought out by T-Mobile in 2020.

Harry Truman was from nearby Independence and spent much time in KC as a younger man.

Currently the area is the envy of anyone who wants the fastest Internet connection in the country, as Google chose the Kansas Cities to be the first test market for their ultra fast Google Fiber network. The city also is the home of Linda Hall Library, the world's largest independently funded public library specifically dedicated to science, engineering and technology.