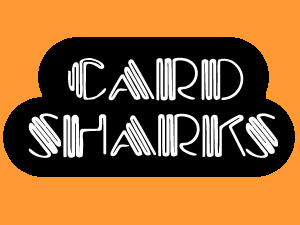 "Ace is high, deuce is low, call it right, and win the dough, on...Card Sharks!"
General opening spiel for the NBC version, as read by Gene Wood

Popular Game Show from the 1970s and 1980s (just don't talk about the 2001 version), Card Sharks, yet another game from the minds of Mark Goodson and Bill Todman, was played with two contestants and two decks of cards.

Alternating each round, one player answers a survey question asked of 100 people (think Family Feud) by guessing how many people actually gave a particular answer. The other contestant guesses whether the actual number is higher or lower than the first contestant's response. Whoever is right gets first crack at their deck of cards.

When controlling their cards, the player must successfully predict whether the next card is higher or lower (aces are high). Whoever gets four cards called correctly first wins the round: the first player to win two rounds wins the game. If the prediction is wrong (or it's the same card value), all progress is lost and the opponent has a chance to play their deck. Players can also freeze after any correct guess, keeping their progress and preventing their opponents from playing themselves. One last option is to replace their starting card with the top one from their deck, but only if the player hasn't called higher or lower yet and only if they were right on the survey question.

If neither player has won after three questions, the fourth question, called Sudden Death, changes the rules: Whoever wins the question can choose who plays, for whoever fails on predicting automatically loses, and freezing is disallowed.

The first version ran from 1978 to 1981 on NBC hosted by Jim Perry and directed by Paul Alter, followed by a CBS revival from 1986 to 1989 hosted by Bob Eubanks (with a syndicated nighttime version running concurrently in the 1986-87 season, hosted by Bill Rafferty). Pat Bullard helmed a 2001 revival which lasted only 13 weeks — and given the rule changes, it's easy to see why.

Served as the fifth episode, and the first part of the semifinals, on Game$how Marathon in 2006, hosted by Ricki Lake. Though the series aired on CBS (where Bob Eubanks' version had aired 20 years prior), the focus was on the 1978-81 NBC edition. ABC premiered a higher-stakes primetime revival in 2019, with Joel McHale as host. It is modeled primarily upon the original Jim Perry version in terms of format.

Brits got several years' worth of a Transatlantic Equivalent titled Play Your Cards Right on ITV, which had Bruce Forsyth at the helm. Among other changes, this edition saw couples playing against each other.