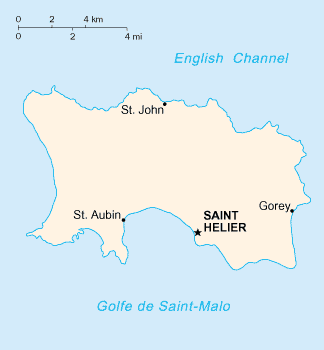 Not that Jersey (though it is named after this one), this Jersey (Jèrriais: Jèrri), officially known as the Bailiwick of Jersey (Jèrriais: Bailliage dé Jèrri, French: Bailliage de Jersey), is an island and British Crown Dependency (Meaning that while it is not part of the United Kingdom and has an international identity separate from that of the United Kingdom, the UK is constitutionally responsible for the defence of Jersey) in Western Europe, located just west of Normandy, France, and is one of The Channel Islands. The capital and largest city is Saint Helier, and while Jersey does have its own language, the Norman language Jèrriais, most people there speak English and they use the British pound as their primary currency, though they have their own banknotes and coins.

Jersey was part of the Duchy of Normandy, a Vassal of the Kingdom of France, whose dukes went on to become kings of England from 1066. The region was taken over by Philip II of France, and mainland Normandy became a part of France, but Jersey and the other Channel Islands remained under English control under the Treaty of Paris in 1259. Before the Duchy of Normandy, it was part of Neustria, the western part of the Kingdom of the Franks. Due to being a former part of France, Jersey has a notable French influence, with many signs and laws being in both English and French, many names of places there being French and the provinces being known as parishes, but the primary language is still English. The island was also occupied by Germany during World War II from July 1st, 1940 until May 9th, 1945 (being one of the last places in Europe to be liberated from the Germans), and many fortifications were built there using Soviet slave labour.

) and making luxury goods there cheaper than in the UK and France, attracting tourists from those neighbouring countries because of that. Jersey does have its own goods and services tax (GST) at a standard rate of 5%, however, and food is not exempt from it unlike VAT.

Notable Jersey natives or inhabitants include: 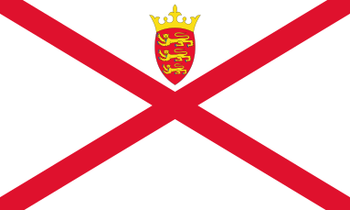 The flag is composed of a red saltire on a white field, with the badge of Jersey in the upper quadrant surmounted by a yellow Plantagenet crown.
The British National Anthem
God save our gracious King!
Long live our noble King!
God save the King!
Send him victorious,
Happy and glorious,
Long to reign over us:
God save the King!
The Jerseyman National Anthem
Nouot' île est nouotre siez nous
Firme sur l'rot chi forte par mé
Louoyale histouaithe et orgilleuse
tchoeurs èr connaîs sants l'vée
à Dgi pouor Jèrri
La bieauté d'nouotre pays
Înspithe yi et lé esprit
Nouot're privilèdge lé soin san bord
Qué Dgieu nouos' Aîgue qué
Jèrri peut par grâce tcheindre bouon
—
Ours is an Island home
Firm on rock and strong by sea
Loyal and proud in history,
Our thankful hearts are
Raised to God for Jersey.
The beauty of our land
Long inspires both eye and mind.
Ours the privilege to guard its shore
So help we God that
Jersey might by grace endure.
GovernmentMiscellaneous