There's probably at least one woman here too!
The Isle of Man (Manx: Ellan Vannin), also known as just Mann (Manx: Mannin), is a island and British Crown Dependency in Western Europe, located between the United Kingdom and Ireland in the Irish Sea, being self-governing with the UK being responsible for defence of the territory. It has about 85,000 inhabitants.
Advertisement:

The territory has been ranked by the World Bank as the 5th richest nation in the world, with insurance eGaming being its largest source of revenue, followed by ICT and banking. The government has also started promoting island locations for making films by offering financial support, leading to over 100 films being made on the island since 1995.

Manx, like Irish, is a branch of the Gaelic languages, with Gaelic cultural influence on the island dating back to the 5th century. For a large chunk of its history, this territory was ruled by Norway as the Kingdom of the Isles, until coming under Scottish rule with the Treaty of Perth in 1266. The island was then tossed back and forth between the Scottish and the English, until it finally came under the feudal lordship of the English Crown in 1399 and stayed with it under the British Crown, but the territory never became part of the UK proper.

This territory is notable for being the first national legislative body in the world to give women the right to vote in a general election, starting in 1881, though this didn't include married women, and being the first whole nation to be awarded biosphere reserve status by UNESCO in 2016.

The isle is also famous for the Tourist Trophy (TT), one of the most notorious (and dangerous) motorcycle race events in the world. It's held since 1907. 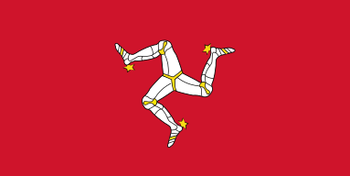