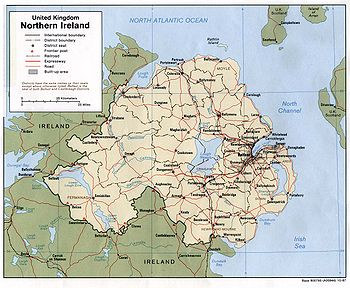 If you tilt your head at just the right angle, it looks like a skull.
"Ulster in the north is the seat of battle valour, of haughtiness, strife, boasting; the men of Ulster are the fiercest warriors of all Ireland, and the queens and goddesses of Ulster are associated with battle and death."
-The Ard Ruide, an Old Gaelic poem dating from the Middle Ages. Still true.
Advertisement:

People can't even agree on the name of this place: choosing whether to say "Londonderry" or "Derry" is equivalent to coming down on one side or the other of The Question. No wonder The Troubles were so bad. Northern Irish is, sadly, perceived as one of the worst UK accents - whether this is because of the association with The Troubles is a question for scholars. Of course, there is an alternate argument which contends that the Northern Irish accent is merely incomprehensible and vaguely threatening which makes it sound worse than it really is. This doesn't stop either the English or Americans incessantly crying, "Oh, I just LOVE your accent. So quaint!" ("And that's when I hit him, yer honour.")

The region is also known as "Stroke Country", a reference to a local joke name for the city of Londonderry/Derry. That thing between the words "Londonderry" and "Derry" is called a "stroke" in some versions of English. An American would call it a "slash", which could have some pretty strange unintended implications. Then again, "stroke" isn't much better, since it brings to mind A Date with Rosie Palms. Or a medical stroke. The city is officially called Londonderry, but has a City Council that calls it "Derry". An attempt to compromise is "The Maiden City", since it wasn't breached in a 1689 siege. (As an aside, the State of New Hampshire in the U.S. Took a Third Option and split its Londonderry

, which was first settled by Ulster Scots, into two towns called Londonderry and Derry

In Dublin, Stroke Country is generally referred to simply as "the North", except in official documents and the news (though sometimes they will use 'the North' too). This is probably not politically motivated as most people in Northern Ireland refer to the Republic as "Down South" or simply "the South". Old-fashioned Irish nationalists might refer to "the Occupied Six" etc. People who want to make a point of how unnationalist they are will use "Northern Ireland", even in casual conversation. Meanwhile "the South" is never called "Southern Ireland" except by clueless people from England and people particularly ill-disposed towards Ireland. Its official name "Republic of Ireland" is often abbreviated as "RoI" or "The Republic" and the shorthand "The South" is acceptable, if hardly ever used in the RoI itself. "Ireland" is a common shorthand for the RoI but confusingly it is also the correct term to refer to the entire island which includes both Northern Ireland and the Republic of Ireland.

"Ulster" is never used in the south, because only two-thirds of the old province of Ulster is in the North (er... you know what we mean). The remainder, Donegal, Monaghan and Cavan, are not. (Incidentally, the northernmost point of the island is in Donegal. So it's possible to be "Down South" and have the North be south of you).

Conversely, 'Ulster' is widely used by unionists of various hues, as is "the Province". Technically both are inaccurate, but the second one is considerably less politicised and is often used elsewhere in the UK - the BBC often refers to the area as "the Province".

Its people are generally laid-back, but a little more grim and stoic than the Republic. They can, since the Good Friday Agreement, claim dual citizenship; forms for both Irish and British passports sit side by side in post offices. As with many other things in Northern Ireland, Brexit threw a spanner in this, when the de Souza case led to British courts declaring Northern Irish people were British by default for immigration law purposes, casting doubt over the future rights of Northern Irish with Irish citizenship post-Brexit.

The local flavour of ITV, UTV (or until 1993, Ulster Television - it changed its name mainly to get advertisers to sell to its thousands of viewers in the Republic), used to embody 'regional programming' (teatime "good news" programme before the proper news, replacing Tonight with Trevor McDonald with an actual current affairs programme, a Friday night live chat show that ran for 16 years), but, apart from continuity announcements to soap operas by this guy

(who really is a trope unto himself), it's now a reskin of ITV1 with regional news. This is an improvement

The BBC's NI branch is mostly the same as in Britain, though it did give us Give My Head Peace

, which helped launch the television careers of 'The Hole in the Wall Gang

Stroke Country has produced several notable figures in entertainment and the arts, though internationally they are usually identified as either or Irish or British rather than Northern Irish as such - thus Liam Neeson and Seamus Heaney - from Nationalist backgrounds - are universally considered 'Irish' while Kenneth Branagh and C. S. Lewis - from Unionist backgrounds - are almost universally considered 'British' (despite both identifying culturally as "Irish"). An exception to this rule is curmudgeonly singer / songwriter Van Morrison. Although born a Belfast Prod, from the ultra-Loyalist Sandy Row area of the city, he is universally thought of as Irish and has never contradicted this. The only thing that will unite Northern Irish people who think of themselves as "Irish" and "British" is their outrage if you call them "English".

Fiction set in Northern Ireland that doesn't involve The Troubles: