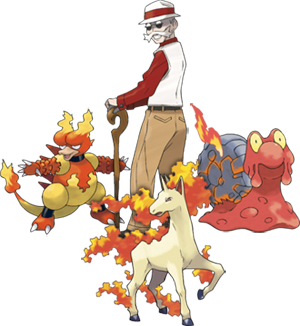 I'm being attacked by Pokémon made of fire in a volcano full of fire! Oh no! They're throwing fire! What kind of technique to use? ...fire? No, that's stupid! Man, this game is hard!
Lisa's Brain: Poor predictable Bart; always takes Rock.
Bart's Brain: Good ol' Rock, nothing beats that!
— The Simpsons
Advertisement:

Curious tendency observed in Elemental Rock–Paper–Scissors universes, where one element will beat another. (Water beats Fire, Fire beats Ice, etc.) These universes often have someone who will completely devote themself to a particular element. Sometimes they will have entire cultures with that devotion.

...Which also means that they have some very obvious weaknesses. Curiously, usually only the heroes get the idea of diversifying their elements. Either that, or the one-element specialists are fully aware of their situation and develop various tricks and techniques that allow them to defend, to varying degrees, against those elements which counter theirs — so that Scissors Cuts Rock. In some settings, this could even be seen as a kind of Min-Maxing — specializing in one element to the point where you can just brute-force your way past a more generalist opponent, at the potential cost of losing hard to other specialists who counter your element.

Interestingly in actual Rock–Paper–Scissors, throwing the same hand every time is a valid tactic against an inexpert opponent. Basically nobody expects a player to play the same hand twice or more. There are even names for the tactic, among those who care about such things

. Also, rock is statistically the most used play, particularly among beginners.

Compare Crippling Overspecialization and When All You Have is a Hammer…. This trope has nothing to do with mediocre lifeless chart-orientated AOR music. See also Complacent Gaming Syndrome.