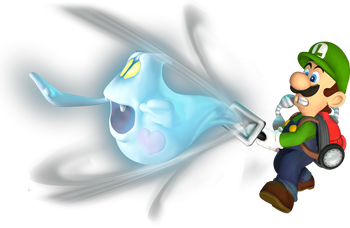 Who ya gonna call? Lu-igi!
"The Suck Cannon is a prototype weapon under development by the Blarg. What we know about this device is that it uses new quantum technology to suck up small enemies, then convert them to explosive projectiles. Simply hold down ◉ to suck enemies into the gun."
—Description of the Suck Cannon, Ratchet & Clank (2002)
Advertisement:

Sometimes, in a work of fiction, the good guys will use Energy Weapons to defeat the bad guys or the monster. Usually, said laser beams work like some science-fictiony approximation of a bullet. Occasionally, though, the beam will do something totally different: suck the target into the weapon.

Most of the time, this doesn't kill or otherwise destroy the target, it just traps them, to (presumably) be disposed of or imprisoned elsewhere later. A lot of the time, when some supernatural menace won't go down under Frickin' Laser Beam fire, you need a Frickin Vacuum Cleaner to get the job done!

For when a character uses themselves as the vacuum, see Vacuum Mouth. See Ghosts Abhor a Vacuum if this gets applied specifically to phantoms.

Not to be confused with Tractor Beam. For weapons that suck figuratively, see Joke Item and Scrappy Weapon.